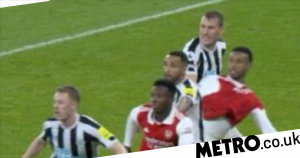 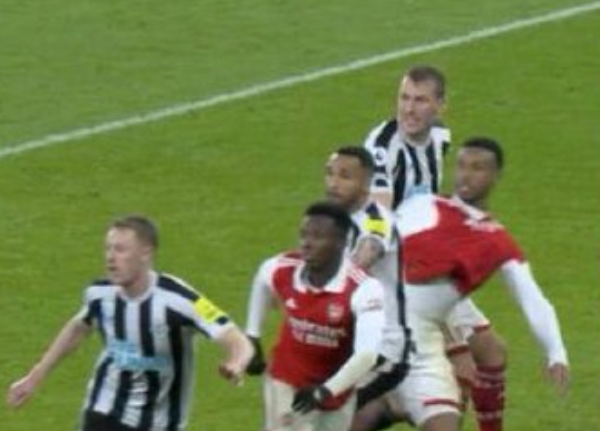 Arsenal defender Gabriel reacted with bewilderment after he was denied what appeared to be a clear penalty in last night’s frustrating draw against Newcastle.

The Gunners missed the opportunity to open up a 10-point lead over Manchester City and pile further pressure on the champions ahead of their visit to Chelsea on Thursday.

Though Newcastle were full value for the point they earned after another robust defensive display, Arsenal manager Mikel Arteta was left fuming by two ‘scandalous’ refereeing decisions in the second half.

And while the Spaniard had few supporting his opinion that Jacob Murphy should have been penalised for blocking Granit Xhaka’s cross with his arm in the 95th minute, there was some merit to his claim that Dan Burn was guilty of pulling Gabriel’s shirt at a set-piece earlier in the half.

Gabriel appeared to agree with his manager and question referee Andy Madley for missing the infringement, as well as the VAR team at Stockley Park for not intervening, by posting a facepalm emoji on Twitter above a video of the incident.

Outlining his frustration after the match, Arteta said: ‘I’m extremely proud of my players.

‘The way we played, dominated the game, tried and continued to control the game. We needed that spark in the final third. We had so many situations. And we had two scandalous penalties.

‘There were two penalties. It’s very simple. I’m talking about what I’ve seen. It was two scandalous penalties. I’m so proud of the work we have done.

‘I think we lacked an extra touch or movement to finish these chances in this game.

‘When you cannot win you cannot lose, and we kept a clean sheet and had a really good performance. Now we go again. 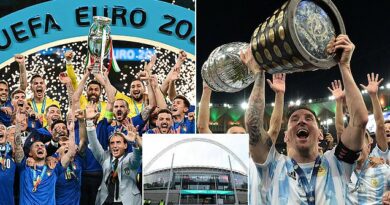 Wembley expected to stage 'Finalissima' between Italy and Argentina