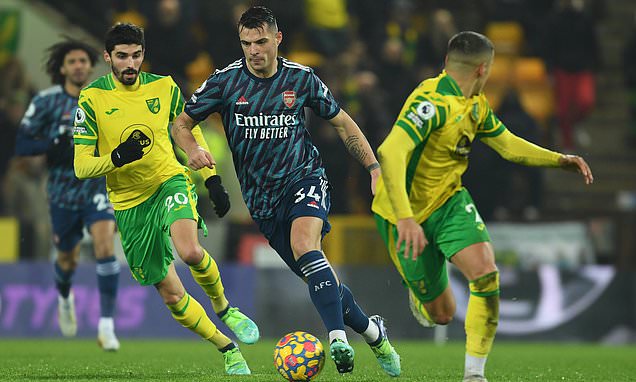 ‘Too disrespectful’: Arsenal fans claim Norwich should be relegated after Granit Xhaka ‘summoned his inner Ronaldinho’ with ‘jogo bonito skill’ in 5-0 mauling

Arsenal midfielder Granit Xhaka has been praised by fans after a sublime passage of play during the Gunners’ thumping 5-0 win over Norwich.

Bukayo Saka bagged a brace, Alexandre Lacazette was on target from the spot and Kieran Tierney and Emile Smith Rowe also struck as Arsenal clung on to the top four with victory over the lowly Canaries.

Xhaka, 29, was not among the goals as Mikel Arteta’s side ran riot at Carrow Road but he still stunned fans with his skill.

The Swiss international produced one of the most memorable moments of the game with a play out of the jogo bonito as the ball found him in the middle of the park.

The midfielder found himself with plenty of time and space and he decided to control the ball with his back and doing a little spin.

Supporters went wild on social media as they reacted to Xhaka’s piece of skill, with some claiming it highlighted just how poor Norwich were. 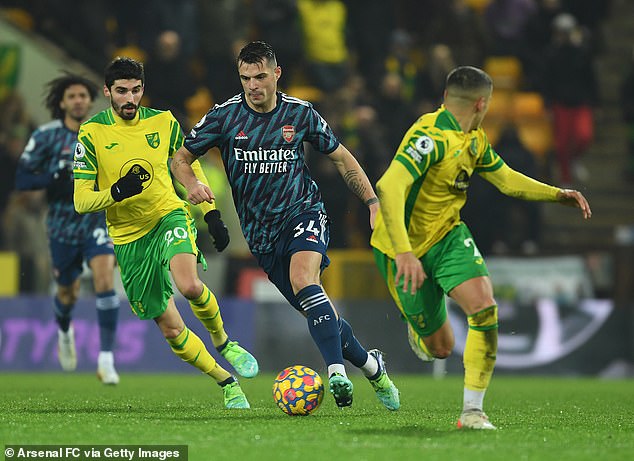 One fan jokingly claimed it was disrespectful for Xhaka to perform the little trick against Norwich.

‘Nah this is too disrespectful,’ they wrote, ‘When Xhaka starts summoning his inner Ronaldinho against you, you need to liquidate your football club.’

Another slammed the hosts as atrocious claiming they allowed Xhaka to bust out the ‘slomo jogo bonito’.

‘They’re letting Xhaka do up slomo joga bonito, Norwich are atrocious man,’ they posted on Twitter. 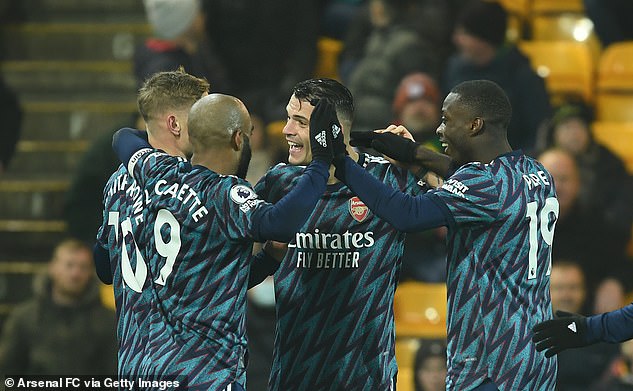 Xhaka is not renowned for bringing flair to the pitch  and fans expressed their shock that he pulled the skill off, claiming he was the last person they would expect.

‘Xhaka is probably the last player I’d imagine doing that. Hilarious,’ one said.

Another wrote: ‘Norwich City need to get relegated for this alone. Xhaka is probably the last player I’d imagine doing that.

‘Man stealing souls out there with his 6-star skills.’

Gunners boss Mikel Arteta was pleased with his side’s overall dominant display after the victory on Sunday.

‘We go to every ground to try to impose our game and this was a really good example,’ said Arteta.

‘It is a big win for us. We looked sharp and committed. I am very happy. It is not easy to win away in the Premier League. The way we were dominant from the beginning and the quality we showed, I am very happy.

‘The direction the team is taking, how we are growing, the understanding, the unity and the support from our supporters in every ground is very much linked with the way we want to play.

‘The unity around the club and with our fans is very pleasing.’