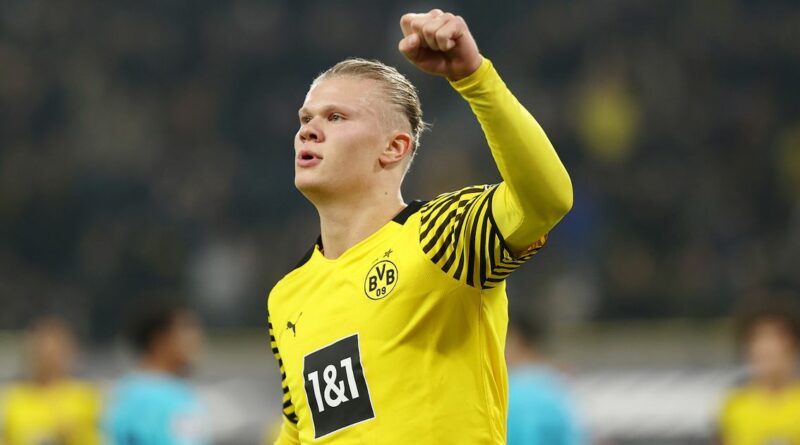 Arsenal fans are begging the club to "bring Erling Haaland home" after a picture of the in-demand Borussia Dortmund striker wearing a Gunners shirt surfaced online.

The Norwegian hitman has become one of Europe's hottest properties in recent seasons having struck a staggering 82 goals in 86 appearances for the Black and Yellows since joining back in January 2020. Manchester City appear set to win the race for the striker's sought-after signature having reportedly agree terms with the 21-year-old, which will see him become the Premier League's highest-earner on wages of 500,000-per-week.

Despite increased speculation surrounding an imminent move to City, Arsenal fans have come out en masse to urge their club to hijack a potential deal. That comes after a picture has emerged of a fresh-faced Haaland repping Gunners attire as a 14-year-old.

An image circulating online shows the Borussia Dortmund forward as a teenager in a matching Arsenal away shirt and shorts from the 2010-11 season. The photo shows the Norwegian looking slight and timid – a stark contrast to the fearsome forward he has become in recent times.

Needless to say, the emergence of Haaland in Arsenal colours has sent the club's fanbase into meltdown. In light of the picture surfacing, avid Gunners supporters have urged the club to do all they can to sign the superstar striker in order to see him sport Arsenal attire once again.

In response to the picture, one fan called for the club to "bring him home," while another questioned the image in disbelief, stating, "…he’s one of our own?" They weren't the only ones to get excited over the surprising snap.

Do you think Erling Haaland should sign for Arsenal next season? Let us know in the comments

A different fan posted, "Literally a perfect sticker for us. I can only dream," while another deduced that Haaland's love of Arsenal appeared legit, adding, "Full kit as well, that's no accident… no going back now."

Haaland isn't the only high-profile striker to have been spotted in Arsenal attire as a youngster, as one fan pointed out. "Just like Harry Kane, Erling Haaland is one of our own," the Gooner playfully added in reference to the Tottenham striker famously being snapped wearing rival colours.

Though it does indeed appear Haaland was an Arsenal admirer in his younger days, it remains highly unlikely the Gunners will be able to lure him to the Emirates this summer, despite the increased likelihood that they may make a Champions League return next season. While Arsenal fans have been left to dream of Haaland leading their line, City supporters are preparing to see that become a reality.