Arsenal fans want Unai Emery to get the boot after his side’s horror show against Crystal Palace yesterday.

But they soon capitulated and the game finished 2-2 at the Emirates.

But prior to the referee’s bold call, Granit Xhaka’s reaction to being substituted had left the Emirates faithful fuming.

The Swiss midfielder ambled off the pitch after his number was flashed up.

He then goaded the Arsenal fans before throwing his shirt to the ground, snubbing Emery’s handshake and storming down the tunnel.

In the aftermath of the clash, fed up Arsenal fans demanded Emery is sacked.

“In my opinion, Emery should be sacked,” commented one fan.

“It’s looking likely that they won’t get top 4 and dropped key points yesterday. Also, he’s lost the dressing room and it’s only gonna get worse, starting with the Xhaka incident yesterday.

“Should try and bring in Jose [Mourinho], would be a good signing.”

“I think it's time Emery left and Xhaka is dropped,” added another.

“Ozil should be brought back and [Joe] Willock should be given more chances.

“I do not want Mourinho at the club. He wants Arsenal so that he can do his usual s*** without getting sacked. Will only set the club back.”

“After today’s farce, it’s clear that Emery has to be sacked, which only looks a matter of time and Xhaka should be stripped of the captaincy,” explained a third.

“How he can play for us again with his relationship with the fans broken I don’t know.”

“Feels like the end of Emery at Arsenal now. Honestly have a feeling he might get sacked. Lost a lot of fans today,” commented one more.

Speaking after the match, Emery explained that the situation with Xhaka would be dealt with behind closed doors.

"He's wrong but we are going to speak inside about that situation," Emery told the BBC.

"I want to be calm but, really, he was wrong in this action." 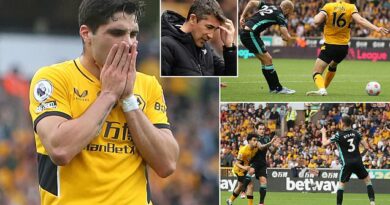 Wolves 1-1 Norwich: Hosts' hopes of playing in Europe come to an end