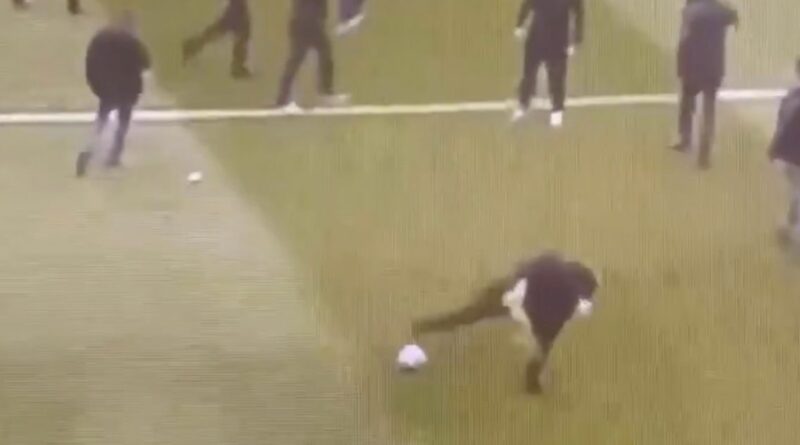 The video, which was tweeted by @seanknowsball, shows an individual stumbling over a ball inside one of Old Trafford's penalty boxes; he then comedically reaches for the ball one with one leg to no avail.

The tweet, which gained traction online, was captioned: "How is Ceballos in the Man United protests?"

The individual in the video was part of the anti-Glazer protests, which saw around 200 fans storm the Old Trafford pitch before United's clash with Liverpool in the Premier League this afternoon.

There appears to be no love lost between Ceballos – who looks set to leave London this summer – and Arsenal fans, and he fell under more criticism for his performance against Newcastle United earlier on today.

One fan tweeted: "Full time which means I don’t have to watch Dani Ceballos anymore."

"If Dani Ceballos needs a lift back to Madrid today I'll happily take him," another added.

However, the video was shared with multiple captions; one joked about the "Sensational Spinning Spaniard," and another pointed out Ceballos had headed "straight to Old Trafford."

Ceballos started for the Gunners in their 2-0 victory over Newcastle earlier today.

The video stems from the protests at Old Trafford today against the Glazers.

United supports stormed the pitch – twice – at Old Trafford after tensions over the club's ownership, and its involvement in the European Super League, reached boiling point.

The protests caused United's clash with Liverpool to be postponed, and a date for the fixture is yet to be confirmed.

Pedri 'thanks' Real Madrid for turning him down as a teenager