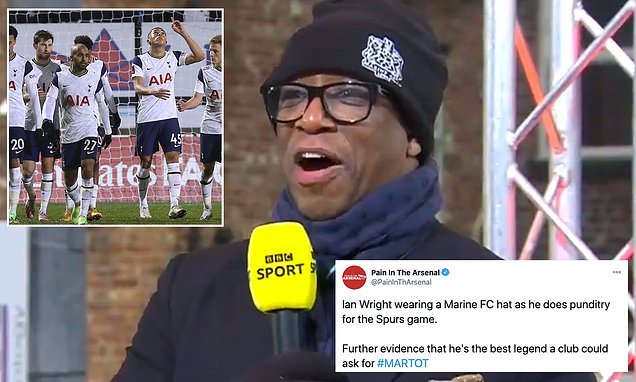 ‘He’s the best legend a club could ask for’: Arsenal fans lap it up as Ian Wright wears a Marine beanie during BBC’s coverage of eighth-tier minnows’ FA Cup showdown with rivals Tottenham

The eighth-tier outfit’s dreams of pulling off the biggest shock in the competition’s history were emphatically dashed following their heavy, but hard-fought, defeat in Crosby.

The football world has still united to celebrate the club’s achievements in heartwarming fashion, however, with Wright even getting in on the act and cheekily pledging his allegiance to Spurs’ opponents. 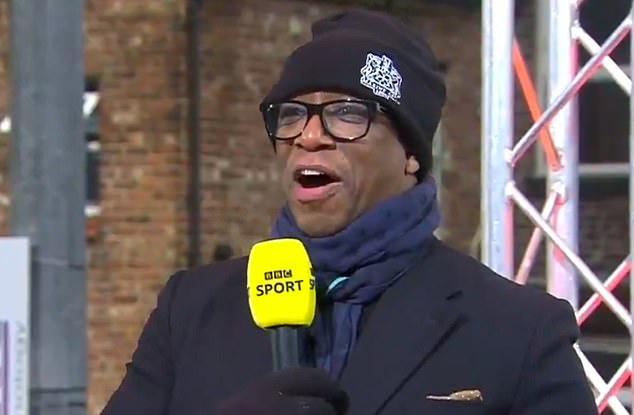 Marine defied all the odds to reach the third round and were rewarded with a memorable home clash against the Premier League giants.

And with every tie being broadcasted live, the BBC were duly selected to screen the game to a large primetime audience on Sunday.

In front of the watching millions, Wright delivered analysis throughout the game with the wooly hat remaining firmly fixated on his head. 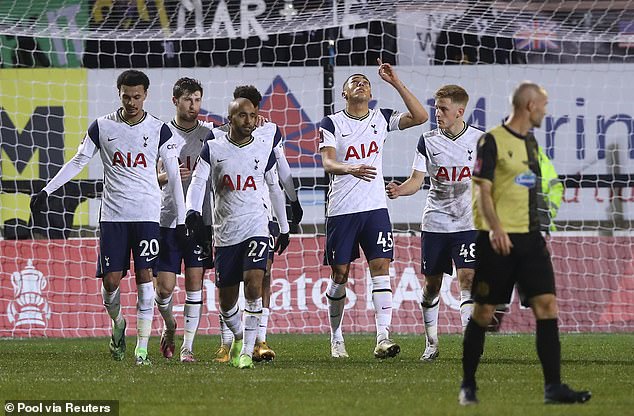 The tweet read: ‘Ian Wright wearing a Marine FC hat as he does punditry for the Spurs game. Further evidence that he’s the best club legend a club could ask for.’

Another user wrote: ‘Seeing Ian Wright wear a Marine hat has made my day.’

According to another person, who clearly also found the hat hilarious, the beanie was ‘what I love to see’.

A fifth said: ‘Today’s football prediction – Ian Wright to wear a Marine hat on Match of the Day later.’

Before the game, Wright and fellow pundit Alan Shearer took the time to reflect back on their own experiences playing games in similar grounds to Rossett Park.

‘This is the kind of stadium when we played Saturday and Sunday morning football,’ Wright recalled. ‘We were trying to get to this kind of stadium to play finals. It’s perfect!’

Shearer also rued the fact that no supporters, due to the lockdown rules in place in the UK, were allowed to attend the game.

He said: ‘What a shame there’s no fans. There’s a few in the gardens waiting with anticipation so it should be a great day.’