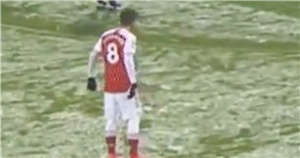 Arsenal fans have hailed Dani Ceballos’ passion after spotting his emotional reaction to the third goal in their win over West Brom.

Kieran Tierney and Bukayo Saka gave the Gunners the lead with first-half goals at a snowy Hawthorns before Alexandre Lacazette put the game to bed shortly after the hour mark.

The Frenchman continued his strong run of form by firing in from close range – and Spanish midfielder Ceballos could not contain his joy.

Arsenal fans spotted him on the edge of the box drop to his knees in jubilation, expressing his joy as his side all but secured their third straight win.

Footage focused on Ceballos’ celebration was posted on Reddit with fans hailing his reaction and noting his passion for the club during his second stint on loan from Real Madrid.

One fan said: “I saw this! Love the passion he has for the club even though he's a loanee!” Whilst another stated: “That is an Arsenal fan. Don’t see passion like that from many players, let alone loanees.”

Another commented: “Ceballos wears his heart on his sleeve and can be a bit of a wildcard, this is why I’m fond of him and happy he’s at the club (even if he’s just on loan)!”

“He clearly loves the club,” one fan wrote, with another adding it was a huge game for him as the impending return of Thomas Partey threatens his place in the side.

They wrote: “I think for Dani you have to remember that as a loan player he's going to be aware that he'll likely get benched as soon as Thomas is back.

“Every chance he gets to be on the pitch when we look good is huge for him right now as it might help him cement more game time.”

Meanwhile, manager Arteta was delighted with three points to continue their recent resurgence.

He said: "Very happy. Always tough to win away from home and the way we’ve done it in a really convincing way against this difficult weather.

“I’m really pleased. It’s three in a row in the last week. We talked about the importance of this week for us and to be able to win the three of them it’s really important.

“There were moments that I think we were really, really good. Both defensively and offensively.

“In certain moments where we thought the game was won, which is something that we have to improve. But in general it’s close to what we want.”

Where will Arsenal finish in the Premier League this season? Have your say here.