Arsenal could soon be given a clear run at the signing of Raheem Sterling from Manchester City after Barcelona’s scouts were instructed to halt their preparations for the January transfer window, according to reports. Sterling has been linked with a mid-season switch away from City in recent weeks as he continues to be overlooked on a regular basis by Pep Guardiola.

The England winger has only started three Premier League matches since the beginning of the campaign and is said to be frustrated with his lack of action at the Etihad Stadium.

Sterling is believed to be weighing up the idea of a fresh start elsewhere and will have no shortage of potential suitors if he is made available in January.

Arsenal have been credited with an interest in the winger since last summer, with Mikel Arteta reportedly keen on adding reinforcements at the top of the pitch.

Meanwhile, Barcelona have also been linked with a move for Sterling, who has previously admitted that he would be open to playing for a foreign club.

However, it seems as though any hopes of a successful approach have been dashed by new boss Xavi’s approach to the January market.

The 41-year-old has asked Barcelona’s scouting team to shelve their preparations for the mid-season window, according to AS.

The report claims that Xavi is planning to conduct a full assessment of his current squad before deciding whether or not to strengthen his ranks.

Barcelona also have a number of talented young players coming through at present, with their new boss looking to aid their progression to first-team level over the coming years.

As a La Masia graduate himself, he is well aware of the academy’s crucial role in supplying homegrown talent and has already been running the rule over a selection of promising youth stars.

It seems as though Xavi’s approach to recruitment at Barcelona could see them drop out of the race for Sterling, giving Arsenal the advantage if they decide to launch a January move for his services.

The player himself recently admitted that he will not hesitate to pursue a change of scenery if his situation at City does not improve over the coming weeks and months.

“If there was an opportunity to go somewhere else, I’d be open to it at this moment in time,” said Sterling, who was speaking at the Financial Times’ Business of Sport US Summit last month.

“I keep saying football is the most important thing to me, challenges that I’ve set myself from a young age and dreams, as well to be honest with you, dreams to play abroad.

“As an English player, all I know is the Premier League, and I have always had something that maybe one day I’d love to play abroad and see how I would come up against that challenge.

“To be fair I should be learning a few different languages. I quite like the French accent and Spanish.”

Sterling has made a total of 307 appearances for City in all competitions since joining the club from Liverpool back in the summer of 2015.

The Kingston-born forward excelled for England at Euro 2020 over the summer and was named in UEFA’s Team of the Tournament as a welcome reward for his efforts. 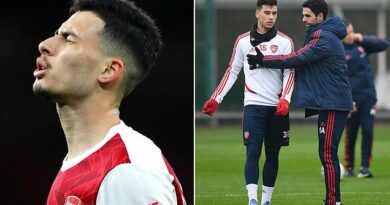 Mikel Arteta urges Gabriel Martinelli to give him a selection headache