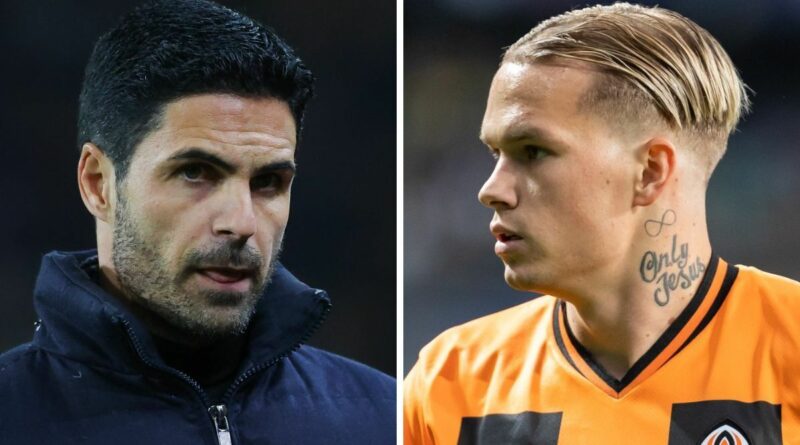 Arsenal could be able to sign an exciting alternative to Chelsea-bound Mykhaylo Mudryk for just £9million between now and the end of the January transfer window, according to reports. The Gunners looked set to land Mudryk after making three bids for the Ukraine international earlier this month, with negotiations thought to have been advanced as recently as Saturday morning.

Chelsea now appear to have muscled in ahead of Arsenal, though, with Mudryk reportedly set to join the Blues after they met Shakhtar’s asking price of around £88m in exchange for his services. Mudryk is said to have flown to the UK on Saturday night to discuss the finer details of his proposed deal with the west Londoners, who could soon be in a position to officially announce the signing if things go well.

The situation has left Arsenal in desperate need of an alternative target to pursue in place of Mudryk, although they might be able to solve the problem by landing one of the players on Chelsea’s shortlist for a cut-price fee over the next few weeks. France winger Marcus Thuram could be snapped up by the Gunners for as little as £9m, according to Christian Falk, who has revealed that Chelsea can still succeed in their efforts to land the Borussia Monchengladbach forward in the not-too-distant future.

“I heard that Gladbach is still waiting for an offer from Chelsea for Marcus Thuram,” Falk told CaughtOffside. “Beside Joao Felix, it’s not the same type of striker, so they still need one.

“Gladbach have an idea of selling Thuram for €10m [£9m] now rather than losing him for free in the summer, then reinvesting the money in a new striker. The offer’s yet to come, of course, and they’re a little bit afraid of Barcelona who have been sweeping up all the available free agents on the market.

“We heard this will be an interesting solution for Thuram, as he doesn’t feel like he has to move at the moment and wants to win the Torjagerkanone [award for Bundesliga’s top goalscorer]. He’s said he doesn’t have to leave but if Chelsea is bringing €10m to the table, you have to do it.”

It remains to be seen whether Arsenal will explore the idea of signing Thuram as a potential alternative to Mudryk, who is now widely expected to join Chelsea instead of the Gunners before the end of this month. They are not expected to increase their latest offer for Mudryk despite seeing their bid of around £62m trumped by the Blues, with their stance having always been to avoid paying over the odds for the 22-year-old’s signature.

However, there is still a chance that Mudryk could turn down Chelsea’s advances in order to hold out for a move to Arsenal after publicly declaring his interest in joining the north London club on a number of recent occasions. Mudryk has posted a number of cryptic transfer hints on Instagram over the last few weeks, while he told CBS Sports back in September that he would struggle to say no to Arsenal in the event of a January bid for his services.

“I do dream [of the Premier League],” said Mudryk when quizzed on a potential move to England in 2023. “I think every guy dreams about the Premier League. Arsenal is a very good team with a very good coach. I like the way they play. Yes it would be hard to say no from my side, I can’t say no but the transfer is not only my decision and my word.”