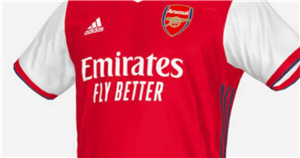 Arsenal's home kit for the 2021/22 season has been leaked and includes a 'mystery blue' colour.

Pictures have leaked online showing a familiar Gunners shirt with a red body with white sleeves.

However, down the sides three stripes will be present – as an indicator of Adidas' logo – which have been called 'mystery blue'.

It has been met with a largely positive response from the fans, who are happy with the classic design.

One fan responded: "Looks good to me. Glad Adidas isn't messing about too much.

"Will be more interested to see how creative they get with the away and third."

Another wrote: "Basic and clean is the way to go for the home kit."

While this supporter posted: "I dig the vneck and simplicity, but this would make all the Adidas home kits so far quite similar designs.

"Easier for me to justify not buying a new one, which is upsetting because I like it when I 'want' the newest one."

A fifth said: "If they’re going to add a touch of blue to the home kits, I kind of think it shouldn’t touch the red.

"Similar to the way the colors are used on the badge. Just me?"

The leak comes at a time when the Gunners have seen their form gain a much-needed boost after wins over Chelsea, Brighton and West Brom.

Arsenal take on Newcastle today in the FA Cup and Mikel Arteta has put the decent results down to the youngsters brought in.

Arteta said: "You use the right word which is enthusiasm and that needs to flourish sometimes in a team when it is a little bit concerned and has some fear because of the results and pressure.

"I think they were really helpful because they re-energised the team and pushed the team in a different direction and different rhythm.

"Obviously young players need that solidity and experience and maturity the experienced players bring, so it is a good combination."