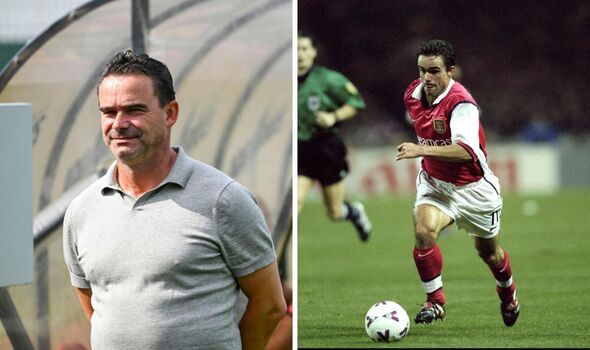 Royal Antwerp have issued a statement confirming that director of football Marc Overmars is currently recovering from a mild stroke after being admitted to hospital. The former Arsenal and Holland winger fell ill on Thursday evening but is now “doing well” as he begins his recovery.

The 49-year-old, who also played for Ajax and Barcelona during his illustrious playing career, moved to Belgium in March after resigning from his role with the Dutch giants after sending inappropriate messages to a female colleague.

An Antwerp statement read: “Marc Overmars, director of football affairs at RAFC, became unwell last night and was admitted to hospital with a mild stroke.

“Marc is doing well in the meantime, but will have to take it easy for a while.

“Marc and his family focus on his recovery and do not wish to comment further. RAFC wishes Marc a speedy recovery!”

He won the 1997/98 Premier League title under Arsene Wenger as Arsenal secured a historic double.

Since then, his career has been somewhat overshadowed by the manner of his Ajax exit after spending time working as the director of football at his former club.

Following an investigation, Overmars is understood to have told Ajax’s Supervisory Board and CEO Edwin Van Der Sar that he intended to resign.

He was later released “with immediate effect,” as per a club statement from Ajax.

It later added: “A series of inappropriate messages sent to several female colleagues over an extended period of time underlies his decision to leave the club.”

Overmars has since got his career back on track in Belgium though with Royal Antwerp currently third in the Belgian Pro League table.

During that time he has helped attract a host of big name signings including former Tottenham duo Toby Alderweireld and Vincent Janssen.

Young gems Gaston Avila and Anthony Valencia have also been signed from South American in a bid to overturn mega profits.

Ex-Arsenal winger Overmars had an impressive eye for talent during his time in Amsterdam with Ajax, who are widely renowned as one of the best clubs in world football for nurturing young players.

He is currently working alongside former Holland team-mate Mark van Bommel, who is the head coach of Royal Antwerp.

Their Pro League campaign recently resumed on Tuesday as Antwerp scored two late goals to salvage a 3-3 draw at Westerlo.