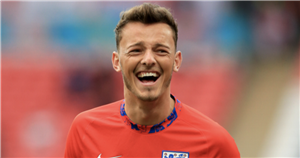 Arsenal could have a very different line up next season after several transfers in the pipeline.

The Gunners have been looking to push their business through as soon as possible with arrivals joining early ahead of their rivals.

After a disastrous season in the Premier League, Mikel Arteta is desperate to bring in his own type of player.

Nuno Tavares has already signed from Benfica for a fee of around £9m, scoring on his debut in a 2-2 draw with Rangers in a pre-season friendly.

But there are more on the way after Arsenal agreed a £50m fee with Brighton for the services of Ben White.

The defender is the top target at the Emirates, who are looking to replace David Luiz in their backline.

The Gunners have fought off the likes of Manchester City and Everton to land the highly-rated defender, who will become their third-most expensive signing of all time.

Nevertheless, the acquisition of White is a magnificent coup for the north London outfit – despite not having any European football to entice players with this summer.

The England international would cost a significant chunk of Arsenal's transfer budget but that has not stopped them from continuing their spending spree.

Albert Sambi Lokonga is also set to sign for a fee of around £17.5 from Anderlecht to bolster Arteta's threadbare midfield.

Matteo Guendouzi has already left while Granit Xhaka and Lucas Torreira are set to depart, joining Dani Ceballos who returned to Real Madrid.

But Arteta has another dream wish to add to his team in the shape of Houssem Aouar, who was one of the first players he tried to sign at Arsenal.

Last year, Lyon told the Emirates side there was no chance he would leave but their position has significantly softened since then.

Ligue 1 clubs are finding themselves in a financial mess due to a bodged TV deal that has left many teams out of pocket.

It means that they have had to look at selling players to balance the books and Aouar's price has been slashed to £25m.

Tottenham are also interested in the Frenchman but if Arsenal win the battle for the 23-year-old, their midfield will gain a massive boost.

So how could Arsenal line up next season?

'I have mild flu': Hubers breaks silence on coronavirus quarantine