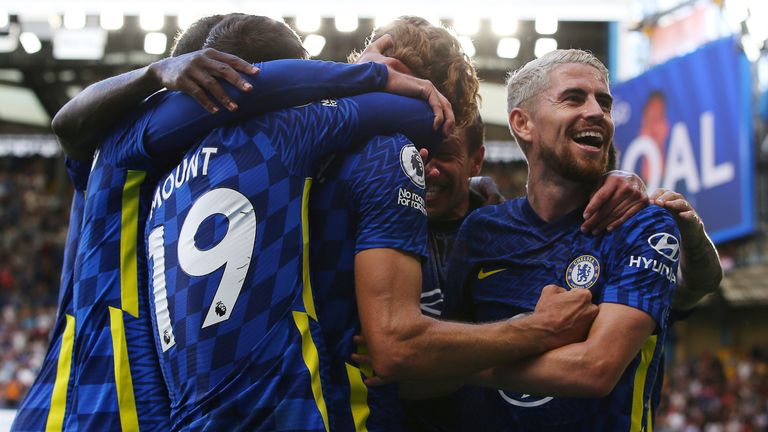 Paul Merson criticises Arsenal’s recruitment under technical director Edu in his latest column, while praising Chelsea for a ‘mind-blowing’ performance against Crystal Palace.

Arsenal’s season got off to the worst possible start on Friday Night Football as they were beaten 2-0 by Premier League new boys Brentford, while European champions Chelsea beat Crystal Palace 3-0 on Saturday, and have new signing Romelu Lukaku still to come into the side.

It’s worrying at Arsenal. You’re still thinking: ‘Where are they going?’

Edu has come in, and the recruitment has been lazy, if I’m being honest. It’s been: ‘Oh, we’ll take Willian on a free… we’ll take David Luiz for cheap.’

I remember years ago in football, managers were judged on signings. Sometimes I think Arteta is left behind, and I’m not sure how much of a say he has got in all of this.

Why would you let Joe Willock go? I’m not saying he’s the answer, but he’s come through the club and is going for £25m, that sort of money isn’t going to change Arsenal. It’s not like a Harry Kane or Jack Grealish sale where you get £100m and can rebuild the team.

But Arsenal are prepared to pay Willian big money. Where is the future in that? It’s quick fixes. Surely Willock is a future player and for the present, and can be involved in the plan.

Jonny Evans is a good example. I was calling for Arsenal to sign him when he left West Brom – a very good player, who was at Man Utd at the wrong time. He would have been a success. But it felt like Arsenal didn’t sign him because he played for West Brom. ‘How can Arsenal be signing players from West Brom?’

My question to Edu would be: ‘What’s the plan?’

‘This is Arsenal now’

I think we got spoiled with Arsenal 20 years ago. Those days are gone. 2004 is gone. We’re all still living in the past with Arsenal. But look where they are – this is Arsenal, now.

Brentford did their homework. They had a Plan A and a Plan B. They got the ball up to Ivan Toney, who caused havoc. Ben White has got a load of stick, but I think it should have been nipped in the bud from source. Their experienced players should have looked at this and put someone to sit in front of Toney. As soon as someone is sitting in front of him, they’re not hitting it long any more.

It’s so poor. It’s almost like Arsenal looked at it and thought: ‘Oh no, that’s not fashionable, putting someone in front of the defender to protect it…’ or ‘they shouldn’t be hitting it long, it’s the Premier League!’

I just thought Arsenal got outfought, outthought, everything. I don’t even think Brentford were mind-blowing, and I think they’ll play better this season!

‘Chelsea reminded me of Man City’

Chelsea are paying £90m for a player they let go in Romelu Lukaku. They don’t care! They don’t think: ‘Everyone is going to go mad that we’re signing a player for three times what we sold him for!’ They just go and sign him.

At the time he wasn’t ready for Chelsea – he’s ready now, he’s a better player all round.

I think he’s a great signing, and a game-changer for Chelsea. Man City have to buy Harry Kane.

Chelsea reminded me of Man City against Crystal Palace. They just completely and utterly dominated Palace, at the highest level, like we see with Man City a lot of the time at home. Teams turn up and they know they’re beaten, and I think we’re going to get that at Chelsea now. It was mind-blowing.

And what are they doing at their academy? Tammy Abraham has gone [for £34m]. They’ve brought through Trevoh Chalobah, who looked established at the highest level on Saturday, they’ve got Reece James, Mason Mount, Callum Hudson-Odoi. It’s mind-blowing.

Frank Lampard did a great job starting this off, bringing them in, but these kids have been at Chelsea since nine or 10 years of age, and they deserve a lot of credit for this.

On Super Sunday, obviously the feeling going into the game is chalk and cheese between the two clubs. But who gave Tottenham a chance on Sunday against Man City? This is football, this is why we love the Premier League, because anybody can beat anybody.

Every game counts this season, and I mean that. Man City are behind already. People will say: ‘Oh it’s only one game’ but I can’t see the top four dropping too many points this season.

I think we’re seeing a gulf between the top four and the rest now.

Toivonen a chance for A-League derby