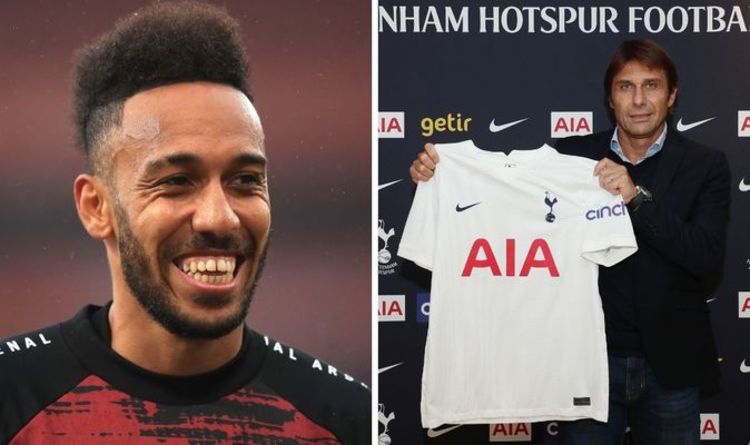 Arsenal captain Pierre-Emerick Aubameyang says he does not care that Tottenham have appointed Antonio Conte. The arrival of the Italian in north London following the sacking of Nuno Espirito Santo has added spice to the Premier League top-four race with both Arsenal and Spurs now in contention.

Arsenal were bottom of the table after three matches this term but have since turned things around with Mikel Arteta’s summer signings now settled.

But Tottenham are now expected to start closing the gap on their rivals and the Champions League places following the appointment of Conte.

Spurs could only manage a 0-0 draw in his first match in charge at Everton but are expected to hit form after the international break now Conte has had more time to work with his players.

Yet in the view of Aubameyang, Conte’s arrival at Spurs has been of little interest.

During an interview with Football Daily, presenter Joe Tomlinson said to the Arsenal skipper: “They’re both Tottenham related, I want to warn you here…

“What were your first thoughts when you heard that Antonio Conte will be Spurs’ manager?”

To which Aubameyang responded: “I don’t care. I’ll be honest, I really don’t care. That’s not my problem, really…”

Aubameyang was then asked by Tomlinson: “Would you rather retire or sign for Tottenham Hotspur?”

The striker instantly fired back, revealing he was once close to signing for Tottenham: “You don’t need to ask the question, you know it already!

“Even more because a few years ago, I was close to signing for Tottenham but in the end, I don’t know what they did. So retire.

“I was in St-Etienne or at the beginning at Borussia Dortmund.

“I was here and went to the stadium but the day after they just never gave us an answer or called back.

“That’s why whenever I play against them they know.”

Although Aubameyang does not have the best record when it comes to beating Spurs – four wins, six losses, two draws – his goal record speaks for itself.

The Gunners talisman has found the net eight times in 12 appearances versus Spurs, including four in four outings while playing for Borussia Dortmund.

Tottenham (16) are currently four points behind Arsenal (20) in the table with the Gunners just two points adrift of the top-four.