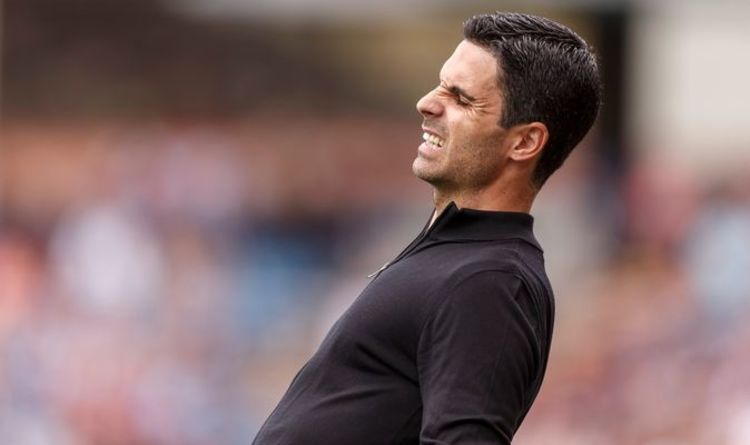 Mikel Arteta is the ‘biggest culprit’ behind Arsenal’s lacklustre start to the new Premier League season, according to former Tottenham forward Garth Crooks. The Gunners boss has struggled to get his side firing on all cylinders since he was appointed to the role by Stan Kroenke in 2019.

Arsenal failed to qualify for Europe at the end of Arteta’s first full season at the helm last time around, with the north London club eventually limping to an eighth-placed finish.

Their poor form has continued into the new campaign, with the Gunners scoring just twice in the Premier League since the beginning of the season.

They slumped to three consecutive defeats before registering their first win over Norwich City earlier this month, with Pierre-Emerick Aubameyang finding the net to secure all three points.

Arteta’s side followed up with another narrow victory at Burnley on Saturday thanks to Martin Odegaard’s sweetly-struck free-kick.

However, the Arsenal boss still finds himself under intense pressure to deliver results in spite of the club’s return to winning ways.

JUST IN: Firmino tipped as ‘first to go’ as Liverpool face transfer headache

Crooks, who scored 17 goals in 55 appearances for Spurs between 1980 and 1985, has singled out Arteta as the main reason behind his side’s poor performances this season.

He told the BBC that Arsenal’s recent victories have only papered over the cracks and are not indicative of an impending return to the Premier League’s upper reaches before the end of the campaign.

“The problem for the Gunners is they look miles from where they really should be right now, and the biggest culprit seems to be the manager,” said Crooks.

“Mikel Arteta appears out of his depth. He has talented players at his disposal and on occasions against Burnley they showed it.

“However, it was a set-piece that dug him out of a hole.”

Arsenal will be looking to claim a third successive Premier League victory when they face Tottenham on Sunday afternoon in the first competitive north London derby of the new season.

The Gunners managed to overcome their bitter rivals in their last meeting at the Emirates Stadium, with Alexandre Lacazette’s second-half penalty sealing a 2-1 win for the hosts back in March.

Arteta will have a big decision to make with regards to his starting goalkeeper for the match, with Aaron Ramsdale toppling Bernd Leno in the pecking order since arriving at the club last month.

The Spaniard admitted last week that he is yet to settle on his preferred candidate between the sticks, denying rumours that he has promised Leno a place in the side for the visit of Spurs.

“I don’t know where they [the rumours] are coming from but they are ahead of me,” Arteta told reporters.

“I think I am the one who picks the team at the weekend and sometimes I read things that I haven’t decided yet.

“They give me ideas at the most, but nothing else because I haven’t made a decision for Saturday [against Burnley] so imagine [if I had] for the north London derby.

“We had to change something and Aaron has come here to try to make us better.”

Arsenal yet to start fresh contract negotiations with Alexandre Lacazette