Arsenal finished their 2019-2020 season with silverware after they lifted the FA Cup on
Saturday.

Mikel Arteta’s side beat Chelsea 2-1 at Wembley, thanks to two goals from Pierre-Emerick
Aubameyang.

But the Gunners forward is one of a number of players who may bid farewell to the club, with
just a year remaining on his contract.

His name is among the list of potential and arrivals at the Emirates, as the rumour mill gets
into full swing ahead of the new campaign.

Here is the Arsenal transfer round-up

Arsenal’s FA Cup final hero has been linked with a move away from the Emirates as he
enters the final year of his contract – and was non-committal when asked about his future at
the club after Saturday’s win against Chelsea.

It means Arsenal qualified for the Europa League, but Johnson believes that Aubameyang,
who has scored 29 times this season, would prefer to be playing in Europe’s premier
competition.

“I think there are two equations – if you’re Arsenal Football Club you have to do anything
possible to keep hold of him.

“As for Aubameyang, he’s 31 and Arsenal aren’t winning the league for the next four years. That's a fact, they’re miles away.

“As a club, they need to do all they can to keep him.

Sevilla centre-back Diego Carlos has been linked with a move to Arsenal, as Gunners boss
Mikel Arteta aims to strengthen his much-criticised backline ahead of the new season.

The club has already sealed permanent deals for Pablo Mari and William Saliba, and would
like to add Brazilian Carlos to that list, according to The Telegraph.
With injuries to Mari and Callum Chambers, Arsenal are likely to start the next campaign with
a shortage of centre-halves.

And with Arteta reportedly willing to listen to offers for Shkodran Mustafi, Rob Holding and
Sokratis Papastathopoulos, Carlos would be a welcome addition at the Emirates.

Carlos – who has also been linked with Liverpool and Manchester City – has a buyout
clause of £68million, but it is believed that Sevilla would sell him for around £54million.

Two Arsenal youngsters may be set to leave the club, according to The Sun.

Ben Sheaf, who has made two first-team appearances for the Gunners, is being linked with
a pennant move to Championship new boys Coventry City.

And Matt Smith is a loan target for newly-promoted League One side Swindon Town.
Smith, who has impressed with Arsenal under-23s, has been on the bench six times for the
club, including for Saturday’s FA Cup final win. 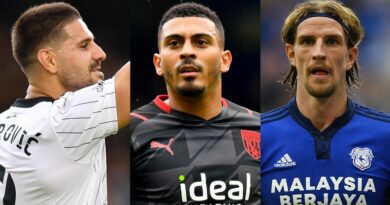 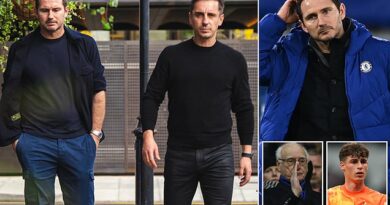 Frank Lampard opens up on his Chelsea downfall to Gary Neville