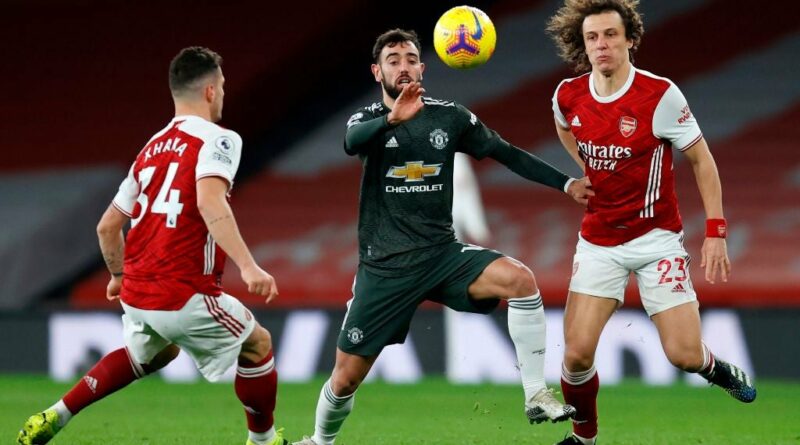 Arsenal and Manchester United fought out a goalless draw on Saturday in the Premier League.

A spiky opening saw more late challenges than sights of goal, with Cedric clattering Bruno Fernandes on the head with a stray arm before the United man was fortunate to escape at least a yellow card when he raked his studs on Granit Xhaka’s calf.

Alexandre Lacazette saw a shot saved, Aaron Wan-Bissaka headed off-target from close range and Fernandes curled a shot wide in the best chances of the first half, but the game remained goalless at the break.

The home side grew in influence after the break and around the hour mark had a succession of chances, Lacazette hitting the bar on a free-kick and Emile Smith Rowe seeing a drive saved by David de Gea, but neither team managed to find the breakthrough.

Here are five things we learned from the game at the Emirates Stadium.

Having been the league’s best player for most of the first four months, Bruno Fernandes is now arguably on his first real dip since moving to Old Trafford.

He might have scored the winner in the FA Cup, but that was from a free-kick and having come off the bench – thus no reflection of performance level.

He can still be influential in terms of setting an example to the team, but his on-the-ball output has dropped wildly in recent times.

Martin Odegaard might have arrived at the Emirates, but Emile Smith Rowe has been spoken about as a breakthrough youngster for a long time at the club; now that he’s managed it, he’s not about to give up his spot in the team easily.

In the first half, the only times the Gunners looked a threat was when their No. 10 got on the ball.

One clever turn and through pass set Nicolas Pepe away on a counter, while he was also effective in switching passes with Gabriel Martinelli and created the best openings after the break – as well as his own shot, saved by De Gea.

Lots more to come from this youngster in the years ahead – particularly when Arsenal have better movement in attack.

Back at the start of the season, United tried to attack Spurs and were utterly out-gunned, losing 6-1.

United lost 1-0 to Arsenal afterwards, but other than that it has been 0-0 with Chelsea, 0-0 with Man City, 0-0 with Liverpool and now again 0-0 with Arsenal.

Typically, there were a handful of Brazilian players on show in a game between United and Arsenal, but the stand-out among them wasn’t as predictable as always.

Fred was solid, but understated. Willian was as dreadful as he has been all season, attacking-wise, after coming on as sub. Gabriel Martinelli was enterprising in the first half, but subbed at the break. Gabriel and Alex Telles were subs – but David Luiz started the game, finished it and was largely flawless throughout.

For a career defender, he seems to have discovered remarkably late in the day how consistency and concentration are the hallmarks of the best, but there’s no question really that he has improved again of late.

Here he was diligent in his covering, effective with clearances and full of determination when it came to do the basics. Exactly as a centre-back should be, primarily.

From being one of the league’s form sides with four wins from five, Manchester United have now dropped five points in the space of three days.

A defeat to the bottom side Sheffield United and now this draw with the Gunners means they’ve lost ground on rivals City if they held title ambitions, and depending on tomorrow’s result could also have given the same five points up to top-four rivals Liverpool or – improbably – West Ham.

It’s now one win in four for Ole Gunnar Solskjaer’s team – further evidence that proclamations of a title charge were woefully premature, as well as evidence that the season has plenty more topsy-turvy events ahead before the true shape of the league emerges.