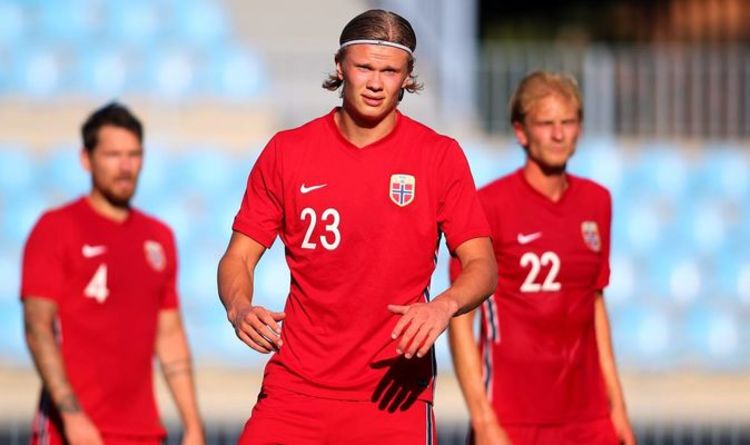 Arsenal look to have lost the battle to sign Martin Odegaard on a permanent basis after he went back to Real Madrid. Mikel Arteta made the playmaker a top priority this transfer window but his Bernabeu return spells danger for Manchester United and Chelsea over Erling Haaland.

United and Chelsea will have to contend with the fact that Real Madrid have a trick up their sleeves in the race to sign Borussia Dortmund star Haaland.

The 20-year-old is top of the wish lists of many clubs around Europe despite a £150m price-tag.

It comes after a phenomenal season where the Norway international scored 41 times in 41 matches, which has seen his value shoot through the roof.

The Premier League has always been an attractive proposition for Haaland, who watched his father Alf-Inge play there for many years as a child.

But it is the Champions League that is central to his plans for his next club – wherever that may be.

What United and Chelsea might not have expected was the impact that Arsenal could have on their transfer tug-of-war.

Arteta was desperate to keep hold of Odegaard after impressing on loan towards the end of the season.

However, Carlo Ancelotti has returned to Real Madrid and intends to utilise the playmaker a lot more than Zinedine Zidane ever planned.

Odegaard and Haaland are close pals and are two of the best players Norway have produced in years.

Though they did not qualify for Euro 2020, the country has high hopes with the duo leading them over the next several years.

And with Madrid interested in signing Haaland, having Odegaard in their ranks would be a major boost.

However, any deal would likely have to happen next year with Los Blancos strapped for cash.

Next summer, a release clause is believed to come into effect which would see Haaland potentially leave for a fee around the £68m mark.

It means Dortmund face missing out on millions, with the striker’s value already nearly twice that amount.

If he has another barnstorming campaign, that release clause will be a huge bargain for whoever triggers it.

For a club such as United or Chelsea, it might be better to get a deal over and done with as soon as possible before more suitors ramp up their interest.