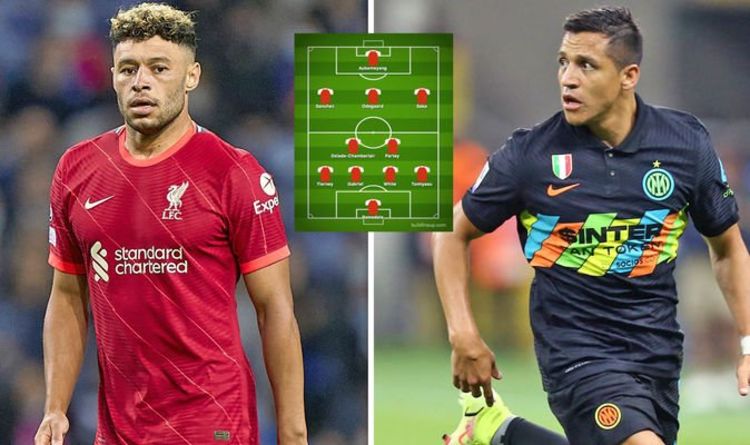 Arsenal spent big in the summer transfer window but, despite that, Mikel Arteta still requires reinforcements. And, in recent weeks, both Alex Oxlade-Chamberlain and Alexis Sanchez have been linked with returns. Should the pair head back to the Emirates Stadium, the Gunners could be in for an improved campaign.

Oxlade-Chamberlain left Arsenal for Liverpool back in the summer transfer window of 2017, feeling he needed to win trophies.

But the England international may now head back, according to The Sun.

Oxlade-Chamberlain is unhappy with life at Liverpool having fallen down the pecking order under Jurgen Klopp, where he’s now behind the likes of Curtis Jones and Harvey Elliott.

Sanchez, meanwhile, could return to Arsenal on a free transfer with Inter Milan open to cutting him loose.

So Express Sport will now take a look at how the Gunners would line up if both players touched down in north London.

Arsenal were criticised left, right and centre when they signed Aaron Ramsdale back in the summer.

Especially after allowing Emiliano Martinez to leave for Aston Villa 12 months ago.

However, the former Sheffield United star has made a solid start to life at the Emirates so far.

And, therefore, he’s poised to be Arteta’s No 1 for the foreseeable future.

Bernd Leno could feasibly leave the north London side, with the Germany international no longer guaranteed regular action.

Arsenal also signed Takehiro Tomiyasu in the summer, bringing him in as a replacement for Hector Bellerin on deadline day.

And he’s been a good asset for the club in the short time since, particularly impressing in the 3-1 win over Tottenham.

The rest of Arsenal’s defence, when fully fit, picks itself these days.

Gabriel Magalhaes and Ben White have potential as a centre-back pairing, having joined from Lille and Brighton over the past 12 months.

And, at left-back, Kieran Tierney has been a great addition since moving from Celtic during Unai Emery’s time in charge.

Part of the reason Oxlade-Chamberlain is thinking about leaving Liverpool is down to the fact he barely plays in midfield.

That, after all, was a key factor when he decided to quit Arsenal for the Reds nearly four-and-a-half years ago.

So if he returns, it’s feasible he’ll be paired alongside Thomas Partey.

Especially with Granit Xhaka sidelined through injury for the foreseeable future.

And then, playing ahead of the pair, would be Martin Odegaard.

Emile Smith Rowe is Arsenal’s bright hope for the future.

But if Sanchez returns from Inter Milan, it’s possible the youngster will find himself spending more time on the bench.

Playing him on the left wing, where he was so devastating during his first spell, could help coax some of the magic of old.

On the right would be Bukayo Saka, despite the teenager being linked with a move to Juventus.

And that would enable Arsenal to keep using Pierre-Emerick Aubameyang as a centre-forward.

MLS is Back’s 9 a.m. kickoffs present clubs with unique challenge. Will late-night starts be even tougher?