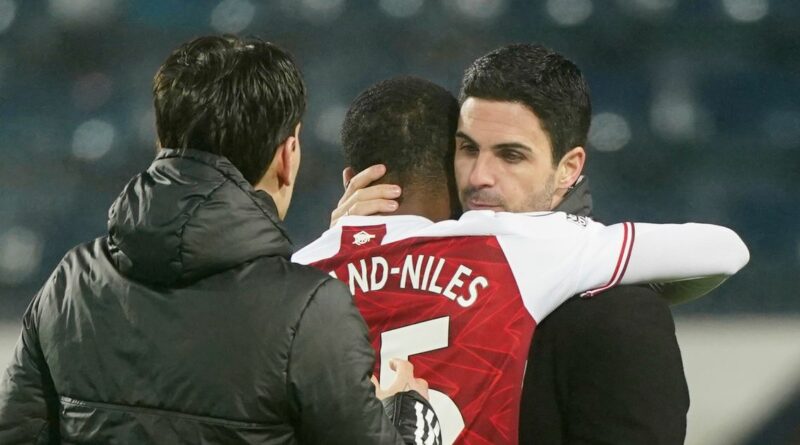 Mikel Arteta heaped praise on his Arsenal squad for meeting their target of three consecutive wins with a resounding 4-0 victory at West Brom.

The Gunners produced one of their finest performances of the season at the Hawthorns, with Kieran Tierney and Bukayo Saka scoring and Alexandre Lacazette grabbing a brace.

The result marks a third consecutive victory for Arteta's side, who overcame Chelsea 3-1 on Boxing Day and battled to a 1-0 win at Brighton on Tuesday.

Arsenal have drastically risen up the table to 11th place and Arteta was delighted by the way his players have responded to the objective he handed them. "I am so happy we were able to achieve the target we had," Arteta told BT Sport after the match. "The table looks completely different, the energy is different and wins bring confidence."

There was some speculation the fixture could be called off due to snow prior to kick-off, but it went ahead and Arteta was pleased with his side's game management on a challenging surface.

The Spaniard added: "[It was] A very convincing win, to win the last three games in the Christmas period is not easy. "When the conditions were better we played some good football. We had to manage some bits at the end because the pitch was difficult."

Arteta reserved special praise for left-back Kieran Tierney, who scored a fantastic opening goal in the 23rd minute and grabbed an assist to go with his clean sheet.

"The first goal, the action from Kieran Tierney was terrific and great combinations for the second. Great attacking play today," Arteta said.

The Gunners boss added: "He has been fantastic since I have been here, the moment he got back from his shoulder injury he has been terrific. He is a lad who gives everything and brings great energy."

Arsenal now turn their attention to beginning their defence of the FA Cup with a third-round clash against Newcastle next Saturday – a task Arteta is relishing.

"We have a week now to prepare for another competition, we have great memories from winning the cup and enjoy tonight," said the 38-year-old.

Have Arsenal turned a corner under Mikel Arteta? Have your say in the comments.