From an encounter with Miss World in Iceland to the game’s ultimate prize being stolen from a pub, via staying in a hotel full of cockroaches… a look back at the spellbinding story of Aston Villa’s European Cup win 40 years ago – SPECIAL REPORT

The most magical journey in Aston Villa’s history began with an encounter with Miss World in an Icelandic nightclub and finished with the game’s ultimate prize disappearing from a pub.

Aston Villa’s victory over Bayern Munich in the European Cup final in Rotterdam on this day, 1982 is immortalised on a banner in the North Stand at Villa Park. ‘Shaw, Williams prepared to adventure down the left, there’s a good ball played in for Tony Morley… Oh, it must be!… And it is! Peter Withe!’ — Brian Moore’s commentary provided the soundtrack to the moment that would define these players’ lives but there was a richness and depth to this 40-year-old story that went far beyond those unforgettable words.

The trophy was stolen from the Fox Inn near Tamworth, where Gordon Cowans and Colin Gibson had taken it to show off to fans, before being handed to police hours later by its remorseful thief. That vignette alone would be good enough to carry this tale, yet it was just one of many. 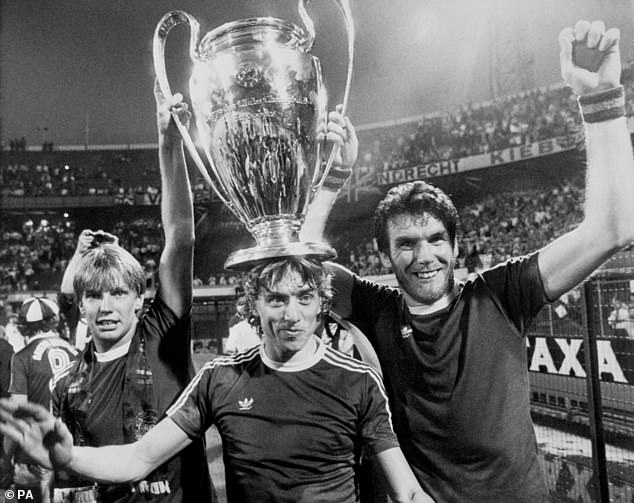 Aston Villa are celebrating 40 years since their famous night in Rotterdam where they won the European Cup (Gary Shaw, Tony Morley and Peter Withe pictured left to right) 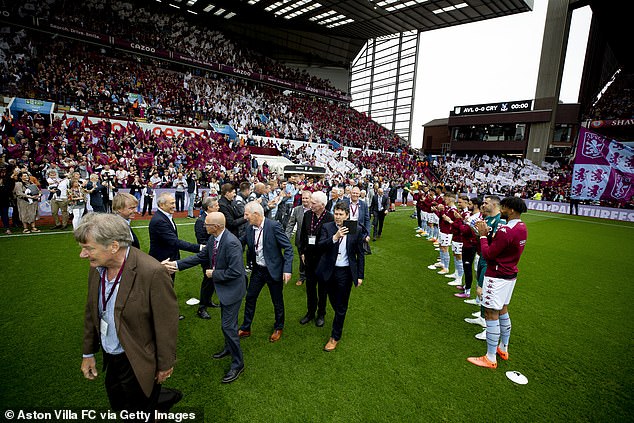 They went behind the Iron Curtain to defeat Dynamo Berlin and before playing Dynamo Kyiv, stayed in a hotel so poor there were cockroaches inside the bread rolls. There was violence in the stands as Villa met Anderlecht in Brussels, and rookie goalkeeper Nigel Spink — one of the greatest substitutes of them all — helped deliver victory in the final. Pre-match tots of brandy in the dressing room carried them to glory at home and abroad.

Even if Villa reach those heights again, the corporate phenomenon that is the Champions League means it could never be quite so memorable. So when the 1982 heroes were celebrated at Villa Park earlier this month — after manager Steven Gerrard had insisted on a guard of honour — it spoke not just to their achievement but to a more magical, evocative era of European football.

‘We could probably guess who will be in the quarter-finals of the Champions League next season,’ Morley, who won six England caps, tells Sportsmail. ‘While there will sometimes be a surprise team — like Villarreal this year — it will generally always be the big clubs. 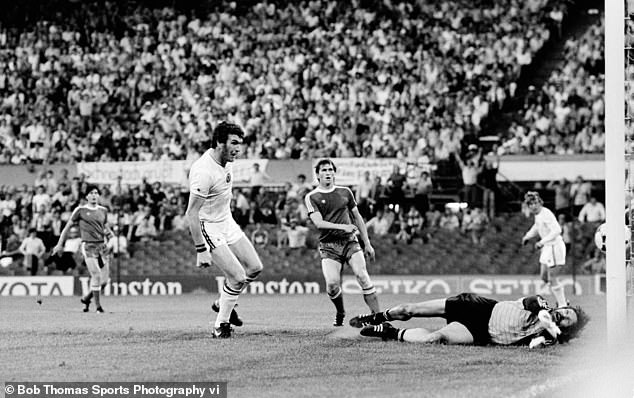 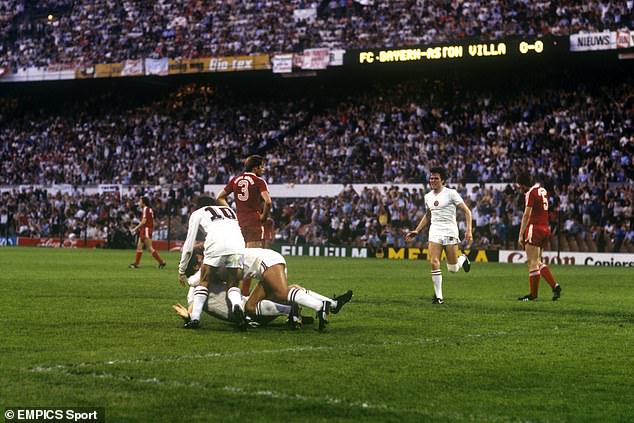 ‘Money talks and that means glamour ties in the final, like Real Madrid versus Liverpool. You look at the squads these clubs have and there are no reserves.’

‘Reserve’ was Spink’s role when he was summoned for the moment that would change his life, nine minutes into the final. Jimmy Rimmer, a hero earlier in the run, was carrying a neck injury and was unable to continue. Spink, then just 23, had only one senior appearance behind him.

‘Gary Newbon, who was working for local television, had somehow managed to get a seat next to the bench,’ says Spink. ‘And it was a proper wooden bench — none of the high-tech seats they have these days.

‘I saw Jimmy waving his arms and Gary said to me, “Spinksy, you’re going on. He’s signalling to come off”. It happened so quickly — I was straight into the action.

‘It was helpful that Bayern were such a good team, because I had no chance to think about what was happening. When I made the first save, I thought, “Maybe I’m all right”. The save from Karl-Heinz Rummenigge is shown a lot but it was blasted straight at me!’ There was little of this tension when Villa travelled to Reykjavik in the opening round. 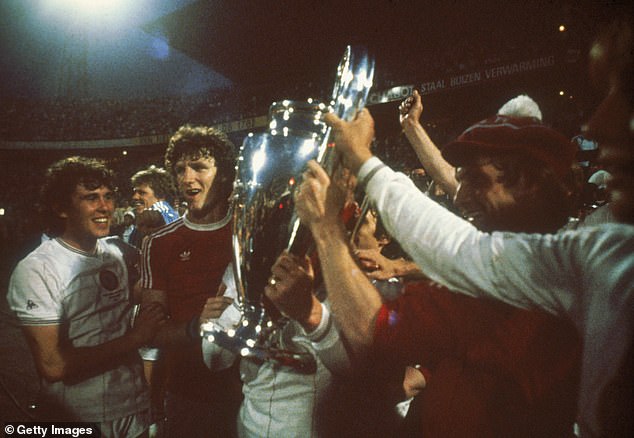 Aston Villa players celebrating after their European Cup final triumph on May 26, 1982

After crushing Valur 5-0 in Birmingham, they were never going to throw it away in the second leg in Iceland.

So some of the players decided to let their hair down in a local night spot — where there was a surprise waiting for them.

‘We were in a disco and Miss World walked in,’ chuckles Morley. ‘Gary Shaw was trying to do his moves — but being from Birmingham, he doesn’t have many! This is what builds team spirit — it’s created off the pitch, not on it. That’s why we were able to do what we did, and why we’re still friends 40 years later.’

Morley, now 67, is engaging company and always ready with a wisecrack. Yet when it got down to business, the winger was a serious customer. Without his brilliant solo goal, or Rimmer’s remarkable save from Artur Ullrich, Villa would never have won in Berlin in the second round, which ensured progress on away goals.

Their reward: a last-eight tie against Dynamo Kyiv and a hotel that still makes the players shudder. Due to wintry conditions in Kyiv, the match was relocated 300 miles south to Simferopol in Crimea. Villa were happy with the 0-0 draw but this was not their main memory of the trip.

‘They were no seats on the toilets, the food was awful,’ recalls Spink. ‘Cockroaches in the bread — can you believe that? Luckily the club had foreseen it and taken our own bread, cereals and chocolate. Modern players would have seen the rooms and walked straight back out again.’

While dealing with that culture shock, the players were still coming to terms with another. The title-winning Saunders, who died in 2019, had resigned five weeks before the quarter-final following a breakdown in relations with the board. Barton, who passed away in 1993, was a very different character from the commanding Saunders but played his role to perfection. 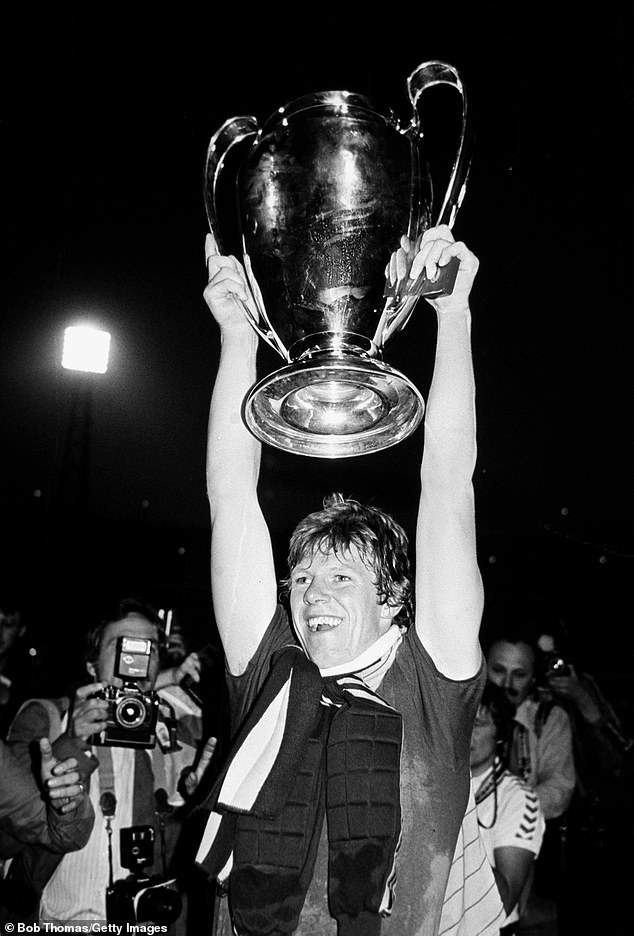 ‘He did what he needed to do — let us get on with it,’ says captain Dennis Mortimer, now 70. ‘An outsider might have come in and made changes, but Tony knew we had a good group. He was never going to ruffle any feathers, and knew we’d be even more determined after Ron had left.’

That determination carried Villa past Anderlecht in the last four and into the final — though they briefly feared they would not be allowed to take part.

Trouble during the second leg in Brussels marred the goalless draw and left Villa anxious about their fate. ‘I wasn’t aware of it at the time but now when I look at the pictures and see the fans rushing at each other, I realise how bad it was,’ said Mortimer. ‘I don’t think I ever really believed we would be kicked out of Europe, even though there was talk of it.

‘There were those on the Anderlecht side who wanted us out but Denis Howell, a Labour MP for Birmingham, put the case for us and came to our rescue in a way. We got the opportunity to go to Rotterdam.’

And how they took it. Bayern were favourites but wasted their chances. Villa were far more ruthless. In the 67th minute, Gary Williams found Morley, and the ball across goal was turned home by Withe. ‘I was too close to the goal to run to our supporters, so I ran into the net to celebrate,’ he recalled in a recent interview. ‘Gary Shaw was the first to reach me and then Gordon Cowans jumped on my neck and dragged me to the ground.’ 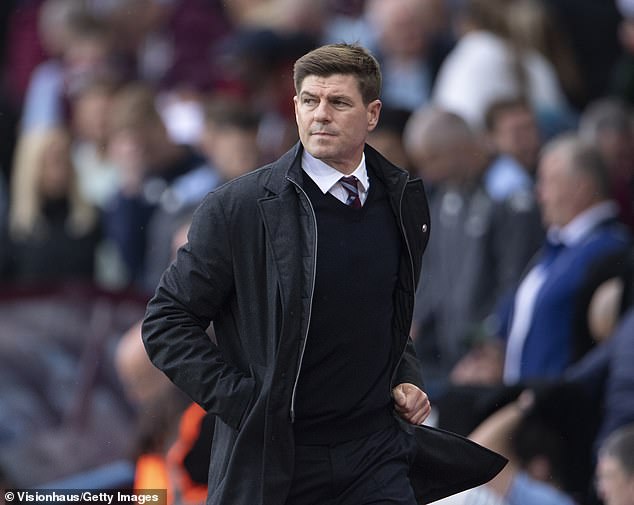 Withe has been ribbed ever since about his close-range finish, which was hardly the cleanest strike. But who cared? Certainly not Mortimer, who still remembers how the Cup felt in his hands as he held it for the first time.

‘You never forget it,’ he confirmed. ‘Sometimes when we’re at Villa Park, they bring a replica of the Cup so we can have photos with the fans, but you never forget the first time, just getting my hands on it and lifting it up. I felt like I held it for about 10 minutes before giving it away.’

As a Champions League winner in 2005, Gerrard understands what these men accomplished. ‘It will stand for ever,’ he said. ‘It was possibly even harder to achieve back then. You had to win the title to qualify and you couldn’t sign world-class players from all around the world. I have nothing but respect for them and we want to bring them closer to today’s team.’

The goal for Gerrard, backed by Villa’s billionaire owners, is to emulate them. If he does, though, he might think twice before nipping down to his local with the European Cup. 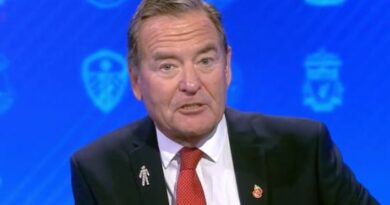 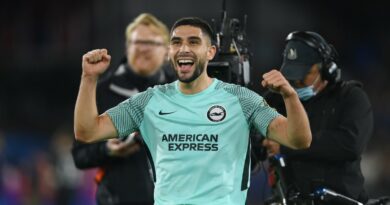 Is Brighton vs Crystal Palace on TV tonight? Kick-off time, channel and how to watch Premier League fixture 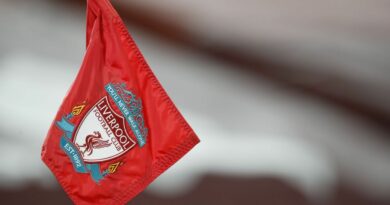