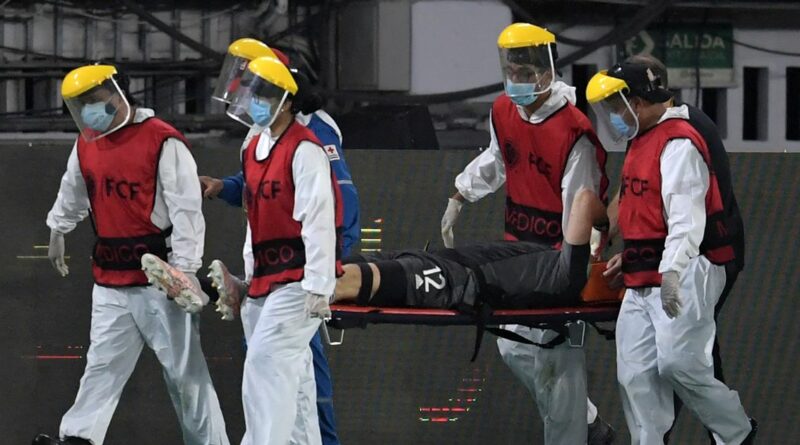 Emiliano Martinez has insisted that he is doing a lot better after help from doctors after he suffered from a loss of consciousness during Argentina's World Cup qualifier against Colombia on Wednesday.

The former Arsenal stopper has had the best season of his career since joining Aston Villa, keeping 15 clean sheets across 38 Premier League appearances and earning his first international call-up for 10 years.

Having made his debut in the 1-1 draw with Chile last week, he was picked to start against Colombia with Copa America set to begin in Brazil on Sunday.

However, his place in the squad has been thrown into doubt after a heavy landing during the first-half of the fixture, being replaced by Agustin Marchesin with the score finishing at 2-2.

The fall came following a collision with Everton's Yerry Mina, and ended with Martinez slamming the back of his head and neck on the pitch.

Speaking after the game, he said: "I'm better, it was a strong hit but the doctors did their job.

"Obviously I wanted to continue playing, the anger of being taken out, and I found out that they drew at the end. It's a bitter taste but I'm fine.

"They took me out because I lost consciousness a little; I hit the back of my neck hard but the crying and the anger was because it was my second match with the national team and I didn't want to be substituted. But the doctors did their job."

Should Arsenal have kept Emi Martinez? Let us know in the comments.

Martinez will return to Buenos Aires with his team-mates ahead of the upcoming tournament, but boss Lionel Scaloni will be keeping a close eye on his condition.

Following a change in venue, there had been fears that teams would pull out of the showpiece.

Those fears have since been ended for fans of Argentina, with Lionel Messi looking to banish memories of two runners-up medals and a third place finish in their last three outings.

"The Argentine National Team confirms its participation in the Copa America 2021, as reflected by its sporting spirit throughout its history," wrote the AFA in a statement.

"With a huge effort from the Argentine Football Association, which placed at everyone’s disposal all the necessary tools available to guarantee each of the specific care requested in this difficult time we are going through, the National Team will travel to Brazil to play the continental tournament.

"All the staff of the Albiceleste team will work together to overcome this adversity that, unfortunately, affects all South Americans equally."