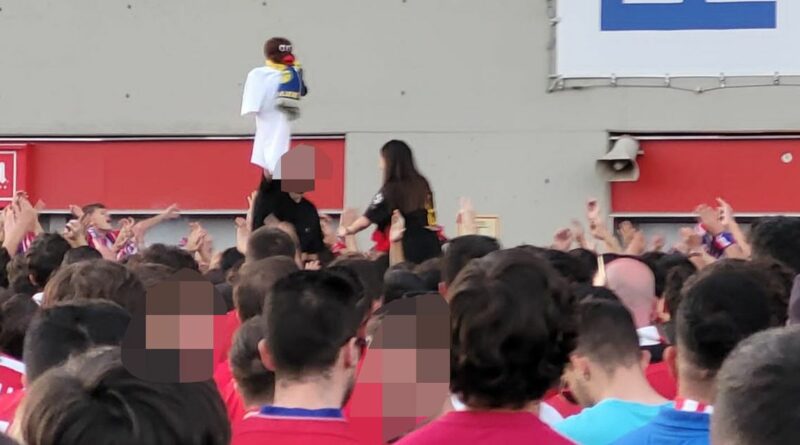 Atletico Madrid supporters have launched vile racist attacks at Vinicius Junior ahead of the Madrid derby on Sunday evening.

One Atleti fan was snapped outside the Wanda Metropolitano holding a puppet depicting racial stereotypes dressed in a white shirt and a Real Madrid scarf. The fan can be seen laughing as he parades the sickening puppet around the stadium.

Vinicius was the target of more racist abuse as groups of Atleti fans were heard chanting "Vinicius is a monkey" as they made their way into the stadium. The disgraceful behaviour has come two days after Real Madrid issued a statement condemning racist abuse aimed at the Brazilian.

Vinicius had been slammed for dancing after netting against Mallorca last weekend. One Spanish journalist Pedro Bravo suggested he should move back to South America if he wanted to dance after scoring.

However, Bravo then added: "He should be respectful instead of acting like a monkey." Vinicius said on Instagram: “‘As long as skin colour is more important than the brightness of the eyes, there will be war'. I have this sentence tattooed on my body."

"My desire to win, my smile and the sparkle in my eyes are bigger than all of this. You can’t even imagine. I was a victim of xenophobia and racism in a single statement. But none of this started yesterday."

Madrid took the lead through Vinicius' compatriot Rodrygo – who latched onto a through ball to blast the ball into the back of the net.

And in a show of solidarity Rodrygo danced with his countryman Vinicius to celebrate the opening goal.

Six Arsenal deals that could happen on transfer deadline day