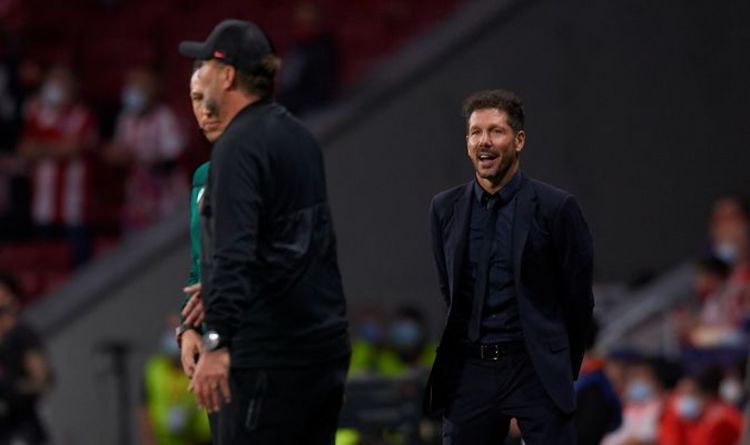 Diego Simeone has been branded ‘cowardly’ after the Atletico Madrid boss snubbed an offer of a handshake from Jurgen Klopp. The incident came following Liverpool’s 3-2 defeat of the La Liga champions in their third game of Group B of the Champions League.

Klopp’s side went ahead after just eight minutes when James Milner turned in Mohamed Salah’s shot.

A stunning volley from Naby Keita five minutes later capped a dominant start to the match for the Reds.

But Atletico got themselves back into the game when Antoine Griezmann stabbed in Koke’s shot, before the Frenchman fired into the far corner to equalise.

Griezmann was then sent off in the early stages of the second-half for a high boot before Salah converted a penalty after Diogo Jota had been bundled over.

Atletico were controversially denied a penalty of their own soon after when Jota barged into Jose Maria Gimenez.

Despite the incident looking very similar to the one that saw Liverpool awarded a spot-kick, referee Daniel Siebert overturned his decision after reviewing the pitchside monitor.

That infuriated Atletico and Simeone, with Liverpool able to hold on to go five points clear at the top of the group.

Simeone’s anger continued until after the final whistle when Klopp went to approach his technical area for the traditional post-match handshake.

The Atletico boss was nowhere to be seen though, having immediately sprinted down the tunnel when Siebert blew for full-time.

Simeone’s decision to snub Klopp have now been blasted by many pundits for being against the spirit of the game.

“I think it’s petty, the comments from Jurgen Klopp before the game he didn’t seem phased by it,” Lescott told BT Sport.

“But tonight, didn’t shake his hand to run off down the tunnel is quite cowardly in my opinion.”

“You’re so caught up you forget [national allegiances] the VAR, penalties, all the goals, there was so much drama and not even a handshake at the end of it,” he told BT Sport.

“Got to respect him so much as a manager Simeone, during the game whining the crowd, the players up, I understand it. But not shaking hands at the end, I just think he lets himself down.”

Liverpool face Atletico again in two weeks’ time, as the Spanish side travel to Anfield for the reverse fixture.
Source: Read Full Article 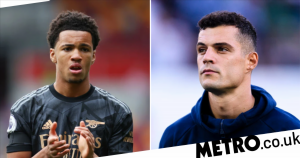