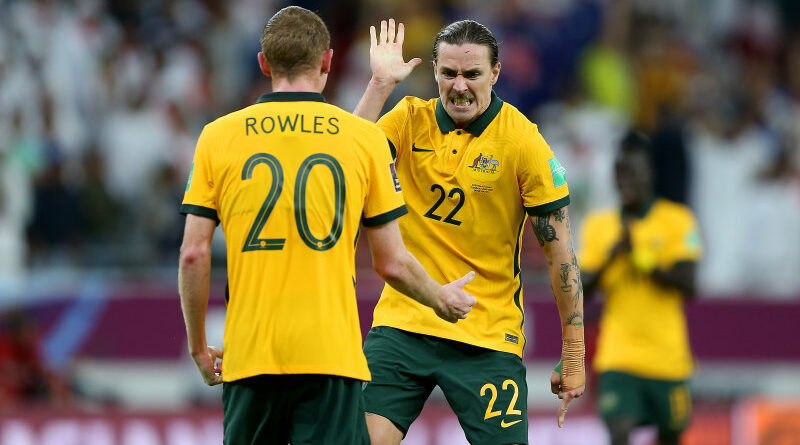 The Socceroos are just 90 minutes away from qualifying for their fifth consecutive World Cup, but next week’s opponents, Peru, will be a far tougher test than the UAE team they defeated in an Asian final eliminator early Wednesday morning.

Australia will certainly be hoping that’s not the case. The two nations met in Sochi in the 2018 World Cup group phase where the Socceroos had the better of the first half but were plagued by a familiar failing – their inability to score from open play.

They created plenty of opportunities but their lone striker Tomi Juric and Tom Rogic, playing in behind, were unable to take their chances. It was the quality of Peru’s finishing that made the difference in 2-0 win with veteran Paolo Guerrero sealing the win with a 50th-minute goal after Andre Carillo had put the Peruvians in front early in the first half.

How did we get into this situation?

It was all about the Socceroos’ failure to find form in the final qualifying group phase. Losses home and away to Japan and a draw and defeat with Saudi Arabia were the difference between those two qualifying directly and the Socceroos having to go through the play-off route. 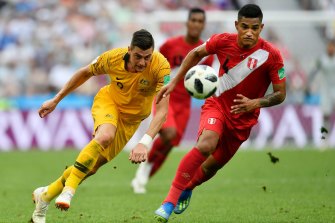 Getting past the UAE in the Asian play-offs has got Australia to this point.

Peru arrived in Doha because they are the fifth-placed South American nation. Their 2-0 win over Paraguay in the last qualifying game edged them into fifth, one spot ahead of Colombia.

Effort, aggression, commitment and desire are qualities prized by coach Graham Arnold, and he said in the lead-up to the UAE game that he had not seen enough of them recently. He got plenty on Wednesday, but he also knows that while they are important, they are not enough on their own.

To beat Peru, more skill and guile will also be needed to shut down and then open up a better opponent. 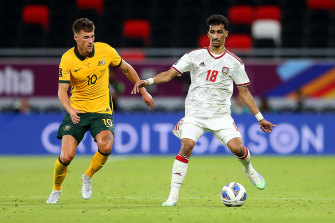 Nathaniel Atkinson was a bold gamble at right-back, but he really had a baptism of fire playing on the dangerous Harib Al-Maazmi, who fired off shots which forced Mat Ryan to make saves. Peru will be more incisive going forward, so tightening up at the back will be essential. Fran Karacic may get a chance ahead of Atkinson.

Mat Leckie is more effective coming from wide areas. He was played as a central striker in the absence of Adam Taggart, but had little impact through the middle.

Jamie Maclaren looked lively and caused problems when he came on, so he may get a chance to start with injury clouds hanging over Taggart.

Leckie could be moved to play wide right, with Martin Boyle – quick and sharp on the right – being shifted to the left.

Ajdin Hrustic will be a critical figure in midfield, where his technical ability and fierce shooting will be a huge asset, so he will need an in-form Aaron Mooy and Jackson Irvine to provide support.

What must Australia do to beat Peru?

The Socceroos still struggle to create goals from open play, and that has been a problem through the years. They still haven’t found a target like Tim Cahill, who could be relied upon to deliver in the crunch moments, and they are still too reliant on set pieces.

However, Irvine’s opener against the UAE, when he was set up by an excellent Boyle run down the right flank, shows that they can do so, at least against opposition of that quality. 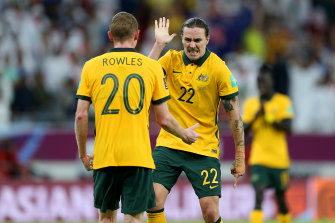 Jackson Irvine (right) celebrates with Kye Irving after the Socceroos’ win over the UAE.Credit:Getty Images

Hrustic’s superb winner came from a more familiar route: a corner. The Peruvians will know that they have to be vigilant against free kicks and corners. Knowing it and stopping it, however, are two separate things: Hrustic’s delivery (and Craig Goodwin’s, if he plays) will have to be centimetre perfect while the Socceroos will have to make better use of any aerial chances that come their way – certainly more than they did against the UAE.

The Peruvians, by dint of their battle-hardened South American campaign, will start as favourites, but Australia are not out of it if they can keep things tight at the back.

Fashioning something from a set piece will probably be their best hope, but scrappy goals from corners count for just as much as those created through brilliant individual skill.

Sometimes the result is all that counts, and as Arnold said after the win over the UAE, how you get the victory doesn’t matter.

If it goes to penalties, the Socceroos will have plenty of confidence in their experienced goalkeeper and captain Ryan. 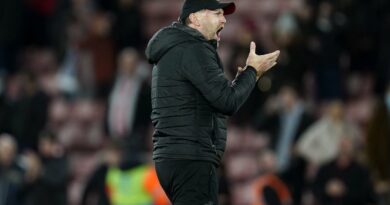