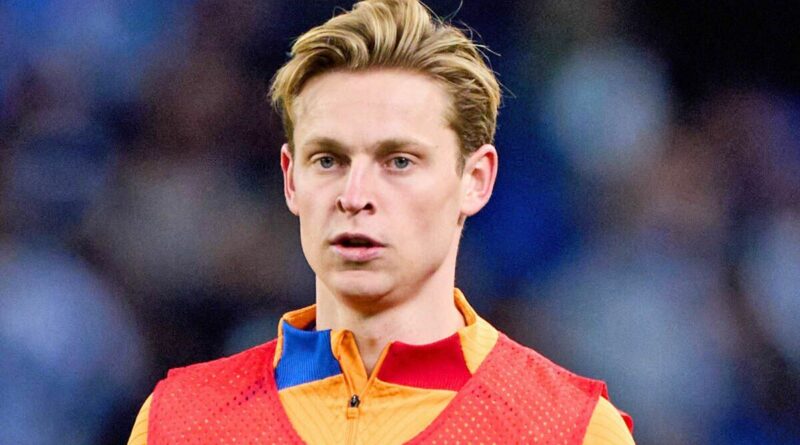 Barcelona had originally been intending to offload Frenkie de Jong by the end of June amid interest from Manchester United. However, after receiving a huge cash boost, reports say the La Liga giants are now willing to ‘bide their time’. The Netherlands international is a top target for Erik ten Hag, who sees the 25-year-old as a key component for his Old Trafford rebuild.

Manchester United have spent the last few weeks looking to sign De Jong after Ten Hag made it clear behind the scenes that the 25-year-old was urgently required.

The duo previously worked together at Ajax, helping the Dutch side reach the semi-finals of the Champions League in 2019 with key wins over the likes of Real Madrid and Juventus along the way.

Barcelona have to submit financial accounts to La Liga by the end of June.

That will determine how much money they have to spend, with the club hopeful of recruiting the likes of Robert Lewandowski, Bernardo Silva, Andreas Christensen and Franck Kessie this summer.

They’re selling off some of their rights, include those for television and merchandising, in order to the balance the books,

And the Daily Mail say that, as a result, Barcelona are now willing to ‘bide their time’ when it comes to De Jong.

While that’s the case, however, United remain hellbent on bringing the Netherlands international to the club this summer.

Ten Hag feels De Jong will be a huge addition to his midfield, especially after the recent departures of Paul Pogba and Nemanja Matic.

Pogba is expected to return to Juventus, six years after he left the Old Lady behind in order to move to Old Trafford.

And Matic has opted to reunite with Jose Mourinho at Roma, having previously played under the Portuguese at both United and Chelsea.

United had previously been hoping Barcelona would be desperate to sell due to their debt, which is close to £1billion.

But with the La Liga giants willing to dig their heels in, it seems like this saga will remain ongoing.

De Jong isn’t United’s only target as they look to boost Ten Hag’s chances of winning silverware at the club.

In defence, the Red Devils look set to miss out on Jurrien Timber – who is likely to stay at Ajax as he looks to make the Netherlands’ World Cup squad later in the year.

But his team-mate Lisandro Martinez is on United’s radar, while Pau Torres remains linked.

United are in the running to land Christian Eriksen, who is a free agent after his Brentford contract expired.

And, up top, the Red Devils have interest in the likes of Antony, Christopher Nkunku and Evanilson – of Ajax, RB Leipzig and Porto respectively.

Regarding De Jong, John Barnes said earlier in the year that the 25-year-old would be a good replacement for Pogba.

“It looks like Paul Pogba is on his way out of the club so bringing in a replacement for him is very important.