Barcelona are set to offer Ousmane Dembele one ‘final offer’ as his contract saga nears its conclusion. Manchester United and Tottenham are two of a number of Premier League clubs reportedly interested in snapping up the Frenchman.

Dembele is out of contract in June and has been locked in talks with the La Liga side over a new deal for some time now.

Xavi announced that a contract extension for the 24-year-old was a priority following his managerial appointment at the beginning of November yet the winger appears no closer to committing his future to the Catalan club.

With his list of Premier League admirers reportedly growing, Barcelona are set to hand Dembele one final offer in a bid to resolve his future and extend his stay at the Nou Camp.

According to Spanish journalist Gerard Romero, Dembele’s agent Moussa Sissoko will meet with Barca this week as they club reportedly prepare to offer the player a fixed salary of around £9.5million.

With Dembele’s current deal expiring in June, the winger can sign pre-contract agreement with a foreign club from January 1, allowing him to depart Barcelona on a free transfer in the summer.

According to Spanish outlet SPORT, United, Tottenham and Chelsea have all met with Dembele’s agent to discuss a possible deal while European Juventus and Bayern Munich are reportedly keen on securing his services too.

The highly-rated French forward was signed for a staggering £130m for Borussia Dortmund back in 2017 but has struggled with form and injury since moving to Spain.

Dembele has only managed four appearances across all competitions so far this term having seen a serious knee injury picked up while representing his country at Euro 2020 sideline him for the first three months of this season.

Addressing the rumours surrounding Dembele’s contract stand-off ahead of a recent La Liga clash with Villarreal, Barcelona manager Xavi told reporters: “I had an individual talk with him [Dembele] and I wanted to make my position clear.

“I count on him for the project and not only this season, I want to have him at the club for many years. I hope he renews, but it depends on him and the club.

“I have spoken to him and he’s very happy here. We’re going to try and let’s see it we can renew [his contract] because, for me, he’s a key piece.”

The Catalan club have reportedly given Dembele a deadline of New Year’s Eve to pen the deal as fears over losing him on a free transfer continue to mount.

Reports in Spain suggest Xavi is set to give the player some much needed game-time during their crucial Champions League clash with Bayern Munich on Wednesday night.

With Ansu Fati set to miss the match at the Allianz Arena, Barca boss Xavi is predicted to place his faith in Dembele with the Spanish giants needing to match or better the result of Group E rivals Benfica, who host Dynamo Kiev in their final fixture.

The Frenchman came off the bench for the final 25 minutes in each of Barcelona’s last two Champions League outings but missed his side’s 3-0 drubbing to Bayern on Matchday 1.

While it looks certain Dembele will play a part for Barcelona on Wednesday night, it remains to be seen whether the winger will take up the club’s final offer as his contract crisis nears its conclusion. 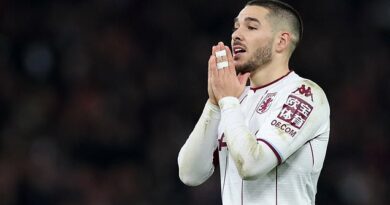 Emi Buendia: Philippe Coutinho and I CAN play together at Aston Villa