By the time Joshua Kimmich had the audacity to have a little look up before lifting a chef’s kiss of a chip beyond the back-peddling Roman Burki and into the top corner from 20 yards out, Der Klassiker had already delivered.

A breathless first half, painted by passes to drool over, smart switches of play, goal-line clearances and slick transitions offered a snapshot of why managerial minds from Jurgen Klopp to Mauricio Pochettino have been keen to stress that football without fans is still… football.

Borussia Dortmund’s hosting of Bayern Munich had many of the great hits: the backdrop of a title challenge, world-class players, a healthy dose of the game’s most exciting young prospects and the narrative of the home side trying to overcome the dominant psychological hold of their opponents.

Those elements were crowned by the intensity of the instructions being belted out, both on the pitch and in the technical areas, a soundtrack that added to the rapid feel of the encounter.

Some passages of play felt like a piece of art, deserving a longer gaze and prolonged appreciation. Thirty seconds hadn’t even elapsed when Julian Brandt turned snipper and took four Bayern players out of the game with a surgical throughball for Thorgan Hazard that forced Manuel Neuer out of his area to clear. 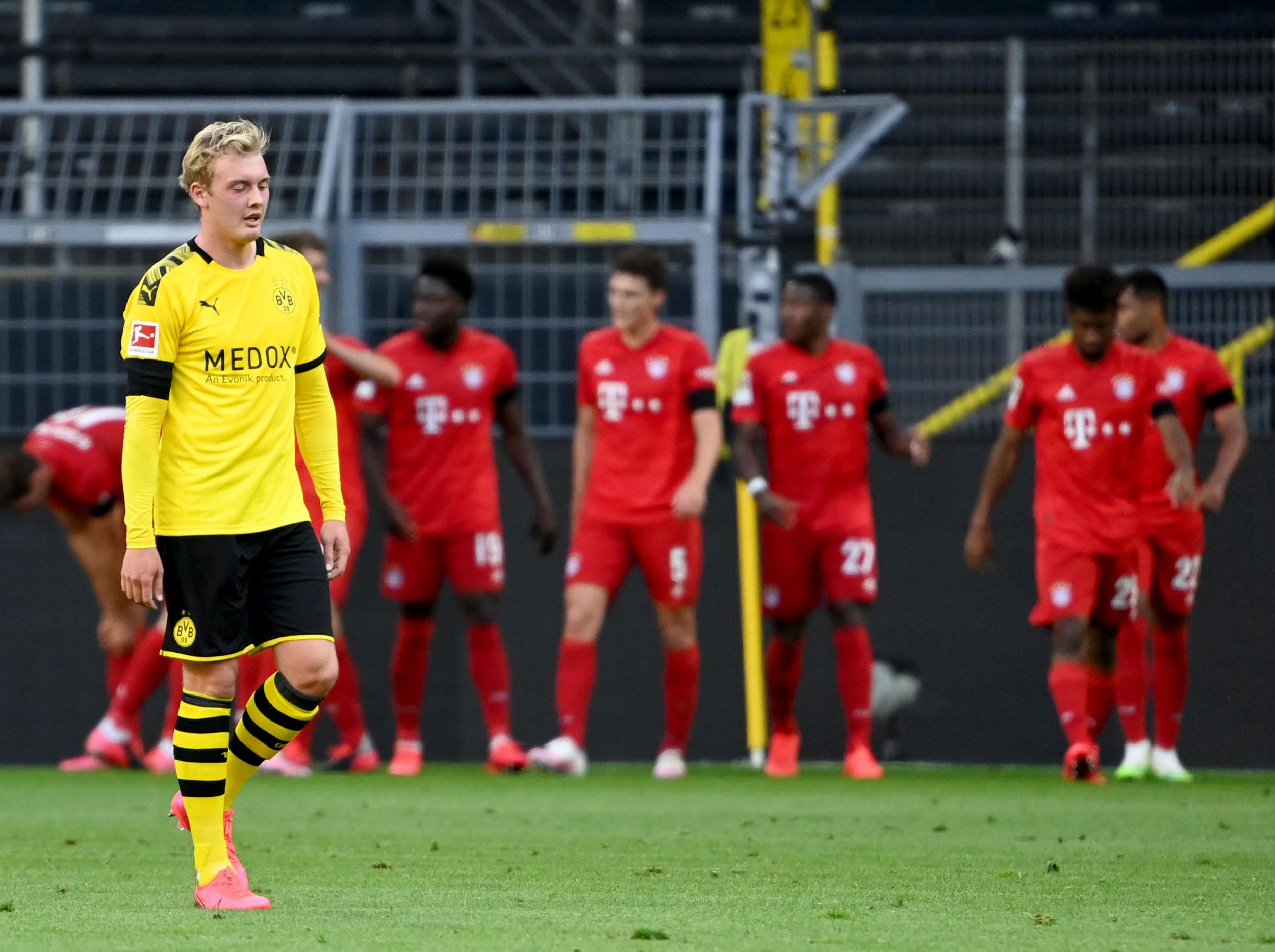 Erling Haaland hunted the loose ball, slid it through the legs of the goalkeeper with his left foot, but Jerome Boateng booted the effort clear off the line.

There was Thomas Delaney’s superb crossfield supply to Raphael Guerreiro to marvel at and swoons over Kimmich’s glorious floated ball from the left that just evaded Thomas Muller.

If you were after a masterclass in positioning and anticipation, Lukasz Piszczek provided it with an excellent backheel to deny Serge Gnabry a certain goal.

For a change of pace, the relentless Alphonso Davies morphed into the Road Runner and clocked a speed of 35.3 kilometres per hour chasing back to thwart Haaland.

That was all before Kimmich designed the decisive moment of the match with panache and ensured Bayern pulled seven clear at the summit.

Dortmund huffed and puffed throughout the game, but snatched at their chances. This was not one of those demoralising dissections that the defending champions have managed to perform on them – BVB have lost six of the last seven top-flight meetings, conceding 24 times in that sequence – but it was still deflating.

Lucien Favre’s men are highly unlikely to make up ground, like Davies did, to deny Bayern an eighth consecutive title.

Their tag as being the only Bundesliga side not to have lost at home was surrendered and much noise may be made on why there was no VAR check for a handball against Boateng, whose arm impeded a Haaland shot.

The tagline for Germany’s top flight is ‘football as it’s meant to be’ and while the coronavirus pandemic has forced the game into what it has to be, Tuesday’s showdown offered so much of what we love to see.