Melbourne City players might have preferred to have stayed in their home city and taken on Melbourne Victory in their first finals game, but if statistics are any guide they should relish the trip to Hindmarsh for their play-off on Sunday evening.

Under coach Warren Joyce, City are unbeaten – home and away – against the Reds, having won four of their past seven league matches against the South Australians and drawn the other. Six of those have come under Joyce.

That is all well and good, says the coach. But it will have no bearing on the outcome of a finals match.

''If we had lost every game we have ever played against them … it would have no relevance. It's a Cup tie, anything can happen, the circumstances are very different.''

But, he added, '' us at our very best can beat anyone in the league''. 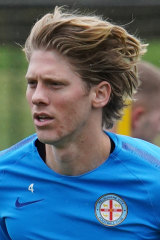 Harrison Delbridge is one of several Melbourne City players ready to return this week.Credit:AAP

They will have to be on top form against a side who pushed them hard at AAMI Park just three weeks ago when both goalkeepers – Adelaide's Paul Izzo and City's Eugene Galekovic – had nights to remember in a scoreless draw.

And Joyce is an admirer of the way Marco Kurtz's men go about their business.

''They are an honest, well-drilled team with no passengers.''

''Craig Goodwin (left midfielder/winger) has been as good a player in his position as any Australian or marquee in the league,'' Joyce says.

''Isiais (Adelaide's Spanish playmaker) is a good player, (Michael) Jakobsen is a good player in this league,'' he added, referring to the Danish centre-back who played for City last season.

Still, as City showed when they hammered Central Coast 5-0 with a team including several fringe players and squad men, they have goals in them.

Jamie Maclaren, the Socceroo striker who missed the Mariners match, will return to the starting line-up.

Ritchie De Laet, the Belgian marquee defender, and Harrison Delbridge, both of whom missed out last week to prevent them picking up yellow cards and a suspension from the finals, are also set to come back.

Curtis Good, another defender who was absent from the Mariners game, will come into the mix as will French forward Florin Berenguer.

''Connor Metcalfe is ill. He's the only one (not available),'' Joyce said.

Even Rostyn Griffiths, who missed last week after injuring a hamstring against Wellington Phoenix, is some small chance of being involved.

''Rostyn has done remarkably well. The medical people have done very well with him.

''Coming back from Wellington we didn't even think he would play if we got to the grand final but he trained well two days ago.

''Maclaren … he's 100 per cent. He has trained no problems. Everybody has put themselves forward. They are putting their hat in the ring for selection, it's what you want in football clubs.

He said there was plenty of unity in a squad that had stuck together all season well – ''considering everything that has gone on '' – a reference to the disruption caused by the Bruno Fornaroli saga.

''The players have had a lot to contend with.''

''I think the spirit has been good all season. this week the training sessions have been really good. Really competitive in the right way.''

Captain Scott Jamieson also returned from a six-week lay off in the game against the Mariners and Joyce paid tribute to both his recovery and attitude during the season.

''He's been a tremendous leader this year. He's taken to the responsibility fantastically well in a season that has not been easy for anyone to be captain.

''When he got his injury we didn't even think he would be playing even in a grand final. He has been working up to three times a day to get himself fit to return.''