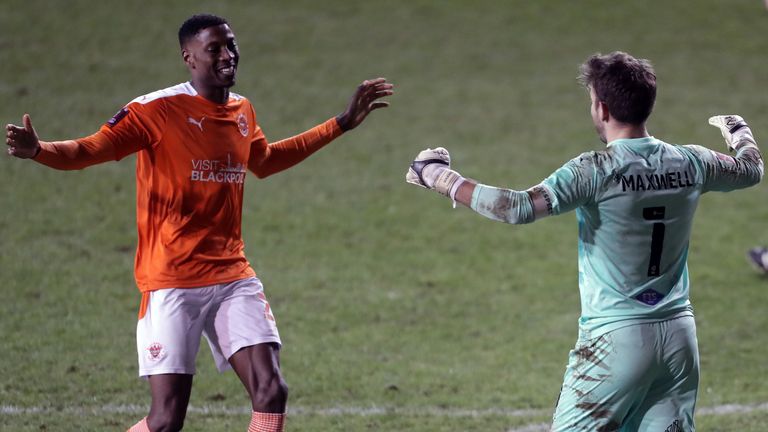 West Brom taken to extra-time by League One Blackpool after being held 2-2 in normal time; Chris Maxwell makes three stops in shootout to see his side progress to round four; FA Cup fourth and fifth-round draws on Monday, January 11 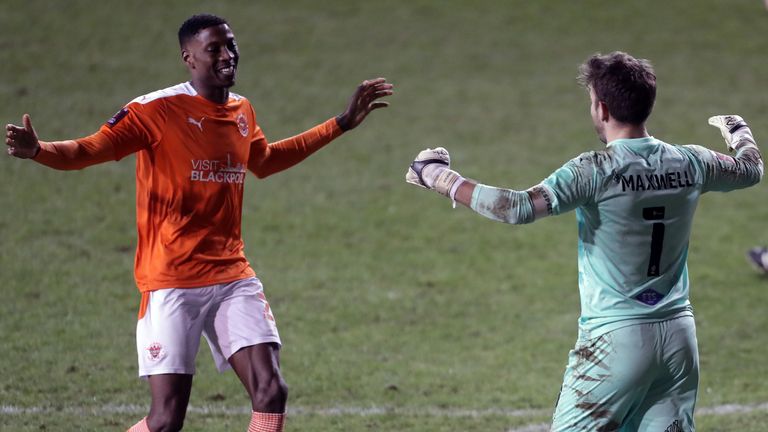 Sam Allardyce’s wait for a first win in charge of West Brom continued after the Baggies were dumped out of the FA Cup by Sky Bet League One Blackpool, losing a penalty shootout 3-2.

Seasiders captain Chris Maxwell, playing his first game since December 19 after testing positive for Covid-19, saved spot-kicks from Kyle Edwards, Darnell Furlong and Matheus Pereira to give Blackpool their first FA Cup win over top-flight opposition since they beat Burnley 1-0 45 years ago.

The match had finished 2-2 after 90 minutes, with West Brom needing a slightly fortuitous penalty from Pereira with 10 minutes left to extend the contest after Jerry Yates and Gary Madine struck either side of Semi Ajayi’s equaliser.

Though Yates missed the opening penalty to hand West Brom the advantage, they could not take it as Maxwell saw his side through to the fourth round.

It is nearly 25 years since Allardyce was abruptly sacked by the Seasiders after narrowly missing promotion, and he will have felt little better on his way out of Bloomfield Road this time around after seeing his Premier League strugglers outfought by a side mid-table in the third tier.

Having said he wanted his fringe players to state their case for more Premier League playing time, Allardyce made seven changes but still named an experienced side with Branislav Ivanovic in defence and Jake Livermore returning as captain following a three-match ban.

Blackpool, now a decade removed from their own stint in the top flight, did not look overawed however, enjoying the better of the opening exchanges.

West Brom were playing without a recognised striker, asking Filip Krovinovic to lead the line the best he could, but struggled to test Maxwell as the hosts created more.

Krovinovic proved more of a threat when he shifted out wide midway through the half, twice cutting inside as his first attempt went narrowly over before a second was palmed clear by Maxwell. But few could argue Blackpool were not worthy of the lead as they struck five minutes before the break, Yates stepping in to sidefoot home an inviting low ball from Bez Lubula.

The Baggies pushed forward in greater numbers after the break and needed a little over five minutes to draw level as Ajayi headed in Kamil Grosicki’s cross from a short corner.

Grosicki and Conor Gallagher passed up clear opportunities to take the lead for West Brom and it proved costly as Blackpool struck again.

Yates should have had his second when he somehow turned Ollie Turton’s cross wide from close range, but the Seasiders would lead with 66 minutes gone as they hit West Brom on the counter-attack, Madine’s sweeping finish capping a fine move.

Pereira, the latest man to lead the visitors’ attack, fired a first-time effort over in response but the Baggies lacked a real cutting edge.

Instead they were gifted an equaliser as Grosicki’s cross struck the arm of Ollie Turton and John Brooks, after a pause, pointed to the spot from where Pereira brought them level.

Both sides had chances in extra-time, with David Button denying Madine early on, but the extra half an hour could not separate the sides. It would take Maxwell to do that instead.

The FA Cup schedule has been confirmed, with the final scheduled at Wembley on Saturday, May 15.

The draw for both the fourth and fifth rounds will take place on Monday, January 11, ahead of the third-round tie between Stockport and West Ham.