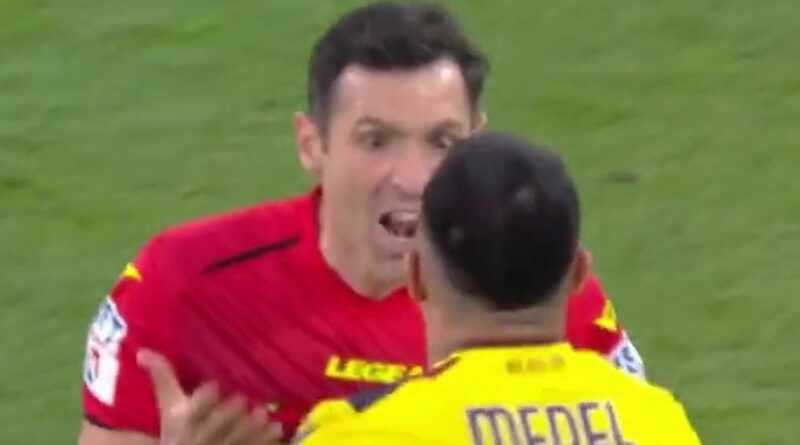 A brave referee screamed in the face of a former Premier League hardman.

Chaos unfolded in the 1-1 draw between Bologna and Juventus in Serie A on Saturday when the teams played at the Allianz Stadium in Turin. The game saw two red cards in just 13 seconds as referee Juan Luca Sacchi sent off ex-Cardiff City and Inter Milan midfielder, Gary Medel, just seconds after his teammate Adama Soumaoro was shown red.

The fiery midfielder is known for his temper which inevitably led to his dismissal from the match when he was shown two yellow cards within seconds. Soumaoro was first sent down the tunnel for denying a clear goalscoring opportunity when he fouled Morata.

The referee initially said he'd won the ball but after going to view the replays on the pitchside monitor, the defender was sent packing. In the heat of the moment, hotheaded Medel went storming over.

Sacchi didn't stand for the abusive screaming from Medel, with the ref giving his fair share of words back in the face of the Chile international. Medel was then given a yellow for his troubles before saying something to the ref that saw him booked for the second time in a few seconds and given his marching orders not far behind his teammate.

Medel is a seasoned professional having started his career in his native Chile with Universidad Catolica before moving to Boca Juniors. Many English football fans will remember the 34-year-old for his short stint with Cardiff City in the 2013/2014 season before he got a move to Italian giants Inter Milan.

Do you think Gary Medel should have been sent off? Let us know in the comments section

The defensive midfielder is known for his hotheaded playing style, with him slapping Diego Costa in the face when the Chilean played for Sevilla before heading off to Wales. The sending offs in the Serie A match meant that nine-man Bologna struggled to keep their 1-0 lead over the Old Lady.

The pair were sent off in 84th minute and Juventus finally found a way through the midtable team's defence in the fifth minute of added time with Dusan Vlahovic equaliser. The draw leaves Juventus six points clear of Roma in fourth place but eight behind league leaders AC Milan, whilst Bologna are 13th, 16 points above the relegation zone with six matches remaining.

Klopp has tapped into Liverpool’s soul… just like Shankly