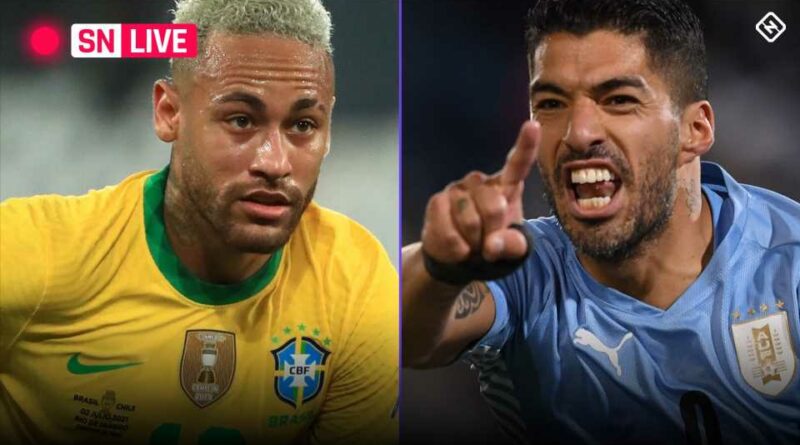 In the marquee match of the 12th round of matches in South American World Cup qualifying, Brazil and its superstar Neymar will take on Luis Suarez and Uruguay in the Amazon’s Stadium in Manaus. But the teams enter the match in very different places when it comes to their qualifying fortunes.

Brazil is sitting comfortably in first place with an undefeated record and a six-point advantage over Argentina. It has the best defensive record in the tournament and still has not conceded a goal at home. That’s the prospect that’s facing a Uruguay side that’s coming off a 3-0 beatdown at the hands of Lionel Messi and Argentina just four days before.

Uruguay enters the match in fifth place in the standings and it’s scrapping for every point it can get to get into the top four places which will guarantee a direct ticket to Qatar 2022. It will close out the calendar year with a home game against Argentina and a trip to Bolivia, the latter which is proving problematic for several teams of late.

Sporting News will be watching the match live and providing score updates, commentary and highlights as they happen.

18th min.: Another goal for Brazil. It’s Raphinha. He’s at the far right post to pick up the pieces on a shot that was saved and he puts it home for the easy finish. Brazil barely breaking a sweat.

10th min.: Goal Brazil! It’s Neymar! What a goal it was. Fred floats the ball into the penalty area for Neymar’s run. The PSG man rounds the ‘keeper and fires the ball past the defenders waiting on the line. Well-worked goal.

7th min.: Neymar goes down just outside the penalty area, but the referee wasn’t in the penalty-giving mood. Neymar didn’t complain much on that one.

4th min.: Calm start to this match. Teams are not really attacking each other just yet. The crowd is not into it. They’re waiting for the players to make the first move.

1st min.: After a moment of silence for COVID-19 victims, we’re off.

Tite makes five changes to his lineup with Ederson manning the nets and Tottenham right back Emerson Royal getting the start. Lucas Verissimo will step in to give Marquinhos a breather and Raphinha will get the start wide right. Real Madrid central defender Eder Militao is out injured.

Uruguay are pairing up Luis Suarez and Edinson Cavani at forward. The Celeste will be missing center backs Jose Maria Gimenez and Ronaldo Araujo along with Giorgian de Arrascaeta, but Rodrigo Betancur is back from a suspension for yellow card accumulation.

How to watch Brazil vs. Uruguay

Brazil vs. Uruguay and every World Cup qualifying match in South America can be streamed exclusively on fuboTV in English and Spanish.

The matches are also available on a pay-per-view basis via cable and satellite TV providers.

Although Uruguay had its chances against Argentina on Sunday, the 3-0 loss was an accurate reflection of the difference in talent between the two sides. It will be the same case in Manaus, and while the result may not turn out to be quite as lopsided, Brazil should at least be one goal better. Brazil also has the best team defense in the tournament — three goals allowed in 10 games — and won’t get scored on easily.

The Brazil -1 Asian Handicap may not be wildly adventurous, but neither is the play we’ll see between these two teams. It’s decent protection if the Selecao have an off day in front of goal.

Lundstram goes from loan toiler to the heartbeat of Sheffield United