Brendan Rodgers is confident Jamie Vardy will be fit enough to feature for Leicester City against Manchester United on Boxing Day.

The veteran forward has been in outstanding form again this season, belying his age to fire his side into top four contention.

Vardy was involved in both goals against Tottenham on Sunday as the Foxes secured a 2-0 win against Jose Mourinho’s side that kept Leicester in second place and ahead of their next opponents.

The 33-year-old took his tally to 13 goals in all competitions with a penalty against Spurs but failed to last the whole contest and was withdrawn in the closing stages following a slight groin strain.

Leicester host United, the team that effectively kept them out of the Champions League this season, on Saturday at the King Power and speaking ahead of the game Rodgers said, with regards to Vardy, ‘he’ll be fine for the game’.

He added: ‘It’s just a little bit of soreness in that (groin) area, which he’s had a few times, but he’ll be okay.’

The task of marking Vardy will, in part, fall to his former teammate Harry Maguire who has, himself, been in excellent for of late. The United skipper put in a commanding performance in Sunday’s win over Leeds United which moved Ole Gunnar Solskajer’s side up to third in the table, not that Maguire is taking much notice of league positions at this point in the season.

‘We’re not getting carried as I said. We had a big win [against Leeds] but there is lots of improvement we need to make to make sure we’re challenging at the end of the season. That’s what we’ve got to aim for. ‘It’s so open this year. We tend not to look at the table – I couldn’t tell you now where we’re sat in the table. We take each game as it comes.

‘We’re starting to realise more and more as a group how important each game is. If you want to be successful you can’t be dropping points or not performing.

‘Sometimes it’s the performance you have to look after because your performance over the season will eventually get the points that it deserves.

‘It’s still early on in the season. I think after three or four games you saw people speaking about how bad our start was and now you hear people saying we’re title challengers. That’s football.’ 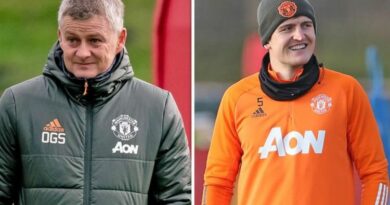