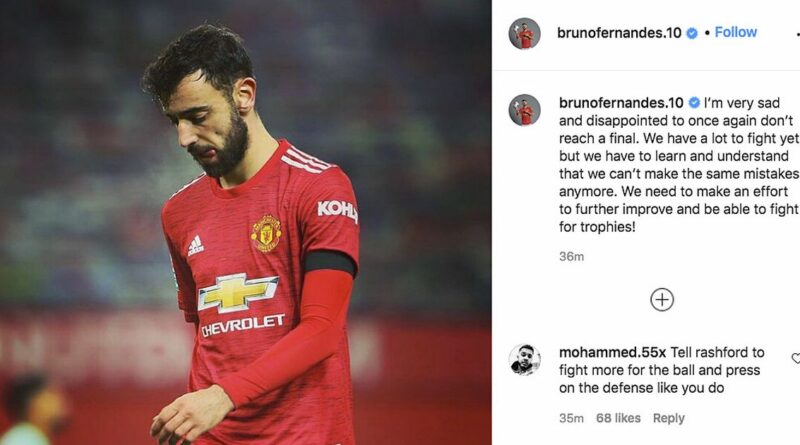 United also lost to City at the same stage in last year's Carabao Cup, while also suffering semi-final defeats to Sevilla in the Europa League and Chelsea in the FA Cup.

Bruno Fernandes played all 90 minutes on Wednesday but, once again, couldn't prevent his side from reaching the next stage.

The Portuguese ace has been in sensational form since arriving a year ago, helping United to third in the league last season, but he recognised the club's need to step up further.

"I’m very sad and disappointed to once again don’t reach a final," Fernandes posted on Instagram a day later.

"We have a lot to fight yet but we have to learn and understand that we can’t make the same mistakes anymore.

"We need to make an effort to further improve and be able to fight for trophies!

Solskjaer was asked after the game if the semi-final block was psychological, but refuted those claims.

"We wanted a final to look forward to as it would give us an extra boost. But it's not to happen, then you've got to dust this off, use the night to get the disappointment away and then we've got big league games [against] Burnley, Liverpool. And within a month suddenly Europa League is here again. There's loads of things to play for."

Jadon Sancho 'says he will join United before the transfer deadline'