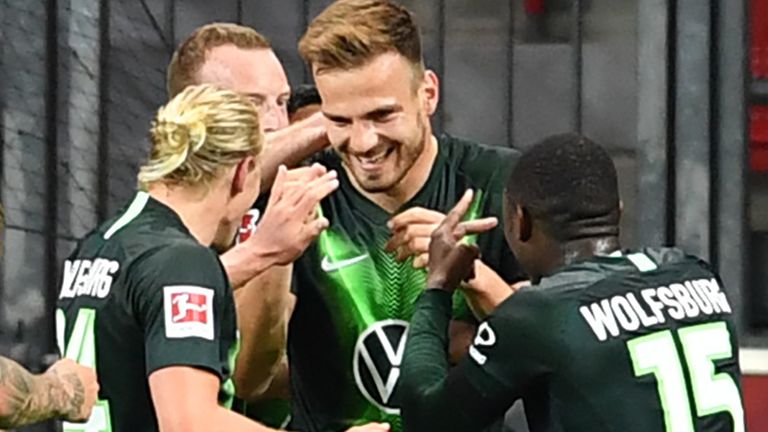 Marin Pongracic scored his first two Bundesliga goals as Wolfsburg romped to a surprise 4-1 win at Bayer Leverkusen on Tuesday, boosting their hopes of playing in European competition next season.

Pongracic headed the visitors into a 43rd-minute lead when he met a Maximilian Arnold free-kick from the right as Wolfsburg dominated the opening half, with Leverkusen ‘keeper Lukas Hradecky denying Joao Victor early on.

Hradecky pulled off two more fine saves shortly after the break but was powerless to stop the rout as goals by Arnold and Renato Steffen made it 3-0 before Pongracic put the icing on the cake with a glancing header.

Half-time substitute Julian Baumgartlinger scored a late consolation for the home side when he swept in a loose ball from close range.

Leverkusen slipped one place down to fifth on 53 points from 28 games, while Wolfsburg stayed sixth on 42 points and on course to clinch a Europa League qualifying berth.

In the early kick-off, Bayern Munich extended their lead at the top of the Bundesliga to seven points after a superb Joshua Kimmich chip gave them a 1-0 win over Borussia Dortmund. Eintracht Frankfurt ended a run of five successive Bundesliga defeats as they staged a late rally to came from behind and force a 3-3 home draw with Freiburg.

Daichi Kamada and Timothy Chandler scored in the closing stages to rescue a vital point for the struggling hosts, who had inexplicably slipped 3-1 behind in a match they dominated. Frankfurt are five points above the relegation zone.

Andre Silva scored the home side’s other goal when he equalised in the first half for Frankfurt, who were guilty of wasting several good opportunities in an action-packed game.

Vincenzo Grifo had opened the scoring for Freiburg before Nils Petersen and Lucas Holer also put away rare chances for the seventh-placed visitors, who were looking to boost their chances of competing in the Europa League next season.

Werder Bremen also drew 0-0 at home to Borussia Monchengladbach, a result which moved the visitors into the top four but kept Bremen in the relegation zone.

Bremen came alive in the second half and missed a couple of big chances, particularly when substitute Davie Selke cut into the area in the 89th minute but could only fire straight at visiting goalkeeper Yann Sommer.

'He would be welcomed anywhere': Graeme Souness hails Raheem Sterling
We and our partners use cookies on this site to improve our service, perform analytics, personalize advertising, measure advertising performance, and remember website preferences.Ok