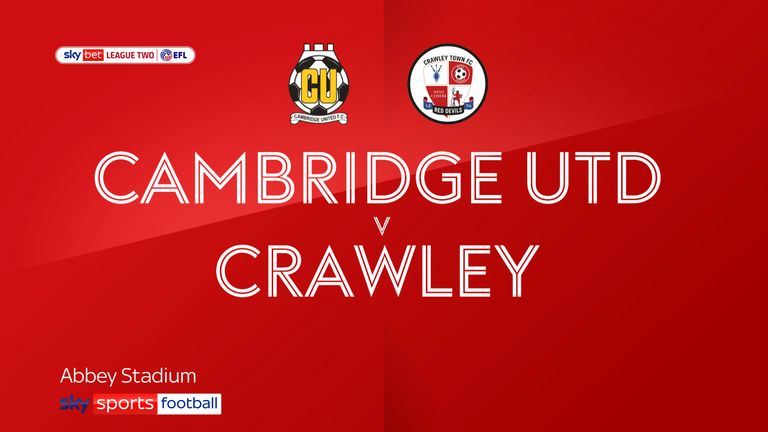 Joe Ironside and Wes Hoolahan also netted for Cambridge either side of Knoyle’s strike, with Jake Hessenthaler having drawn Crawley level early in the first half.

A lively start to the game saw both sides score in the opening 14 minutes.

Cambridge went ahead after 11 minutes when striker Ironside grabbed his 10th goal of the campaign, flicking Hoolahan’s free-kick into the far corner.

However, the visitors were level only three minutes later following a fine passing move when Sam Matthews played in Tom Nichols, who pulled the ball back across for Hessenthaler to slot beyond Callum Burton.

The hosts would restore their lead on the stroke of half-time though thanks to defender Knoyle.

The right-back received Paul Mullin’s pass and smashed a brilliant effort into the top corner from outside the box to make it 2-1.

Adam May saw an effort saved low by Glenn Morris after 57 minutes as Cambridge chased a third, before a short corner routine led to Mullin’s shot being deflected wide.

U’s debutant Shilow Tracey forced Morris into a late parry, but then ran clear to pull the back to Hoolahan, who scored to seal Cambridge’s win five minutes from time.

Who is Georgina Rodriguez? Everything you need to know about Cristiano Ronaldo’s girlfriend