Carlo Ancelotti says Saturday’s Merseyside derby will reveal whether Everton have managed to close the gap on Liverpool.

Everton have made a 100 per cent start to the season across all competitions and sit top of the Premier League table with four wins from four.

While Liverpool boss Jurgen Klopp believes Everton can challenge for the title, Ancelotti says his side still have some way to go before they can be considered Premier League contenders, but he thinks the lunchtime clash at Goodison Park will highlight how much progress they have made.

“I want to say thanks to him,” replied Ancelotti when asked about Klopp’s comments. “To be a challenger for Liverpool could be really good for us.

“But Liverpool is doing so well. I think we are not so far, but still far from them. We can have a good test against them on Saturday to see how far away we are.

“They are the best, they were the best last season and one of the best teams in the world, so it’s a fantastic challenge.”

Ancelotti is looking forward to pitting his wits against Klopp, who he considers a close friend.

“I feel good when I am with him,” said the Italian. “We don’t have a lot of time to talk because we’re really busy, but every time we meet we spend a good time.

“He is a fantastic man. He gives me a lot of energy when I am with him. I have a lot of respect for him. It is an honour for me to be considered his friend.”

Ancelotti has no injury concerns after all of players on international duty reported back in good shape.

Saturday’s derby marks 10 years to the day since Everton’s last Premier League win over Liverpool. The Reds were trounced 7-2 by Aston Villa in their last match but Ancelotti says that result has had no bearing on his team’s preparations. 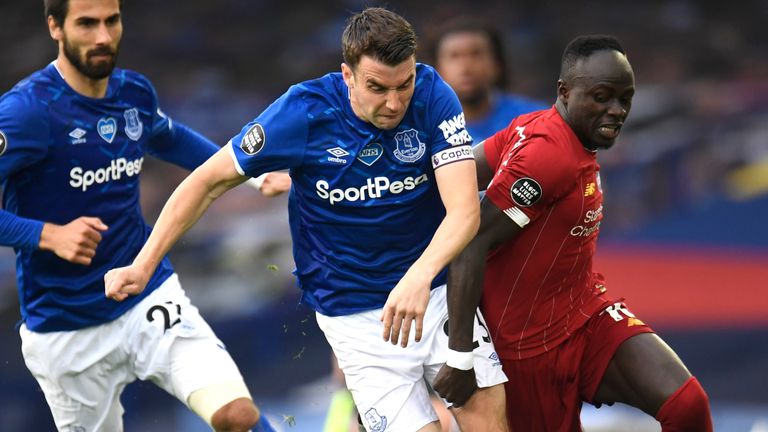 “We don’t try to think what happened in the last game,” he said. “They are a fantastic team that plays with a lot of intensity and quality. This will be the opponent we’re going to play.

“We have to pay attention to them, they have a lot of quality, but we have to be confident to be able to show our quality.

“The feeling in the dressing room is good. We started pretty well. We know it will be a fantastic challenge. We will be ready for that, knowing it is the most difficult challenge for us in this moment.”

‘Derby win would show anything achievable at Everton’

Leon Osman was a member of the last Everton side to taste victory in the Merseyside derby, precisely 10 years ago this Saturday.

He told Sky Sports what victory on Saturday would mean for his former club.

“Beating them would be massive for the belief it would bring to everyone connected to the club. For the likes of Allan and James Rodriguez, maybe it won’t make too much difference to them.

“But for those players that have lost a number of Merseyside derbies, it has become a weight around their necks, so it would breed so much confidence.

“It would also underline that these first seven games weren’t a fluke, and that this is what these players are capable of doing. It would show this is a quality team moving in the right direction and anything is achievable.”

The long and short of it: Storm’s attack will be the deciding factor
We and our partners use cookies on this site to improve our service, perform analytics, personalize advertising, measure advertising performance, and remember website preferences.Ok