Ancelotti feared Digne could be set for a lengthy spell on the sidelines after damaging ligaments in Toffees training at the end of November.

But after undergoing a successful operation on Monday, the France defender has been tipped to return earlier than expected by his manager – who seemingly fired a shot at Liverpool.

Everton fans have been ripping into their Merseyside rivals since Reds centre-back Virgil van Dijk suffered a potentially season-ending ACL injury at Goodison Park in October.

The Toffees faithful believe Liverpool have overreacted to Van Dijk’s setback, replying to the Dutch defender’s posts on social media and joking: “We thought you were dead?”

And when asked about the outcome of Digne’s surgery, Ancelotti quipped: “He is still alive.

“No, it went well. [Two-three months] is the period but knowing Lucas Digne, I think he can recover soon – as soon as possible.

“In this aspect, he is really, really a strong professional.”

Everton fans certainly saw the funny side of Ancelotti’s remark, taking to Twitter to poke fun at Liverpool.

One wrote: “He’s [Digne] fared better than Van Dijk then.”

“Love it,” said another.

While one simply posted: “Hero”.

Van Dijk is back in training less than five weeks after undergoing his own surgery, although a return date for the Liverpool star is still unclear.

The Premier League champions are yet to rule him out for the entire season and remain hopeful he could return to fitness during the business end of the campaign. 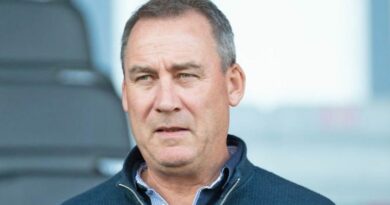