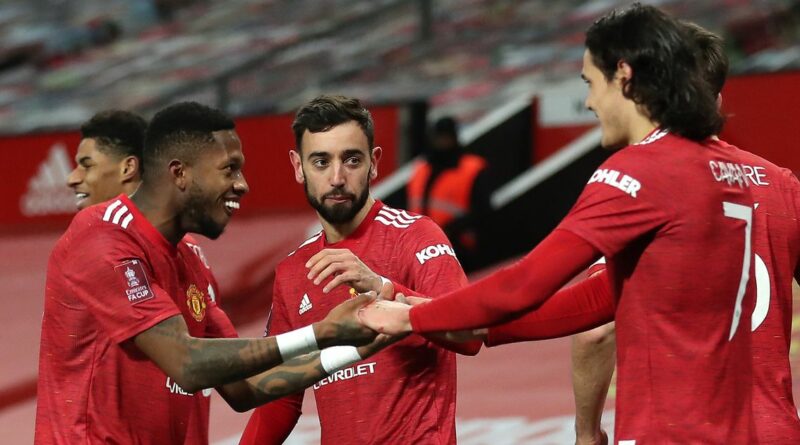 Practice made perfect for Bruno Fernandes as he dumped Manchester United's arch rivals Liverpool out of the FA Cup.

Fernandes came off the bench to score a stunning 78 minute free-kick to send Liverpool out and United into a fifth-round tie with West Ham.

Afterwards Solskjaer revealed Fernandes responded to being benched by spending extra time practising his free-kicks on the training ground.

Hailing Fernandes, Solskjaer said: “It was a great goal.

“When you leave him out, like I had to do today, he stayed about 45 minutes after training yesterday shooting free-kicks – so I was quite confident he’d hit the target today.

“He’s never happy with me when I tell him to go inside if he’s playing the day after, so he got some practice.”

Fernandes, who took his goal tally for the season to 16, said: “I’m happy because we won.

“I work a lot on this kind of goal, free-kicks, and this one was good. Before the free-kick, Edinson Cavani told me 'try to hit one at that side of the keeper'

“I tried and it went well. I think we played well. We created a lot of chances, we pressed them more than in the game in the league, and I think this was the point to win this game.”

Asked about the significance of beating Liverpool, Fernandes said: “I know, I think everyone knows, and I know now the fans are happy and they will have a good week.”

Mo Salah gave Liverpool the lead, but United went ahead through Mason Greenwood and Marcus Rashford.

Salah got Liverpool back on level terms, but Fernandes had the final say with his late strike.

Rashford went off late on with a knee injury and Solskjaer said: “His knee was bothering him, so he’ll have a scan tomorrow and we’ll see where we are.”

Liverpool's problems continued, with Jurge Klopp's side now having won just once in their last seven games in all competitions.

"We can take things out of this game, we try to learn from every game," said Klopp.

"It's good for Mo Salah, good for confidence. It was a tough game. We wanted it hard, but tonight it was not enough.

"If you win a game there are negatives, if you lose a game too, but I saw the boys really, really wanted it."

Will United win the FA Cup? Have your say in the comments below