Robert Lewandowski scored in each half, his first from the penalty spot, to lift the Germans above Ajax, who were held 1-1 by Benfica in Lisbon.

Manchester United’s stirring comeback win in Group E over Juventus means they are two points ahead of Valencia, who registered their first group win, 3-1 against Swiss side Young Boys at the Mestalla Stadium.

Carlos Soler doubled the advantage early in the second half and the visitors were reduced to 10 men with 13 minutes left when Sekou Sanogo was shown a straight red card for his challenge on Francis Coquelin.

Hoffenheim’s stoppage-time equaliser in Lyon means City have not qualified for the knockout stages yet. Hoffenheim hit back from 2-0 down after playing most of the second half with 10 men due to Kasim Adams’ dismissal for two yellow cards.

First-half goals from Nabil Fekir and Tanguy Ndombele had put Lyon in control, but the Germans rallied to avoid defeat and elimination, with Andrej Kramaric and Pavel Kaderabek – in the second minute of added time – both on target.

Real Madrid made light of their La Liga troubles to go top of Group G with a thumping 5-0 win against Viktoria Plzen in the Czech Republic.

Kostas Manolas headed Roma into a fourth-minute lead and after Arnor Sigurdsson had equalised for the Russians early in the second half, Iceland team-mate Hordur Magnusson was sent off for his second yellow card.

Midfielder Pellegrini struck the winner three minutes later but neither Real nor the Italians, both on nine points, are yet guaranteed a place in the knockout stage. 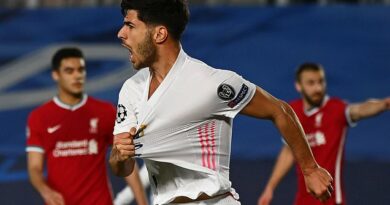 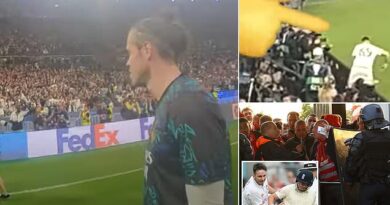