Championship games could restart before the Premier League.

The EFL held a board meeting on Wednesday in which they discussed pressing ahead in the second tier and are also determined to introduce a wage cap.

But League One and Two are likely to be finished with tables decided on a points-per-game basis – although the play-offs are set to remain.

However, the Championship is now on course to restart with games from June 6 – which is well ahead of the Premier League who are hoping to get going again on June 12.

The EFL will take part in talks with the Government, Premier League and Professional Footballers’ Association on Thursday to try and get the green light.

But the Championship is set to play games behind closed doors, in their own stadiums and potentially using St John Ambulance crews at games.

It does mean that the season will play out, will give Leeds and West Brom the chance to get promoted while the play-offs and relegation will remain.

The other significant issue being discussed in the Championship which was discussed between the clubs in their meeting on Wednesday afternoon was a wage cap.

Mirror Sport understands they must agree a figure of between £15m and £20m for the total wage bill.

Then any club over that figure – which is always the case with relegated teams – will only be able to sign new players on £10,000-a-week which is the average wage in the Championship until their finances fall into line with the wage cap.

League One and Two clubs will meet again on Friday and there is likely to be huge tensions as to how they finish their season with it now looking certain they will not play any more games.

It is set to be decided on a points-per-game basis but some clubs want that weighted to take into account results and home and away form which could yet be a major stumbling block.

Promotion and relegation will definitely stay in place – and the EFL are also keen to keep the play-offs for League One and Two.

The play-offs could yet be played behind closed doors at Wembley, it would be a fairer way of settling the issue and is always a money spinner for the EFL.

Norwich sporting director Stuart Webber insists all relegation and promotion issues should be settled on the pitch and no club should go down to the Championship if they cannot finish their games.

Webber said: “In my opinion it needs to be settled on the pitch, not off the pitch, because a big question we have around restarting is it’s fine if we restart and three teams are relegated.

“If we do (complete the season and go down), fine – because that’s where football should be played: on the pitch not in the boardroom. 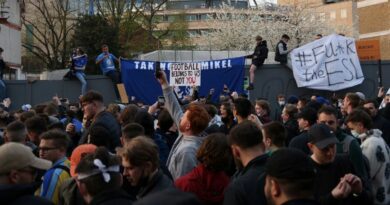 Mauricio Pochettino is spurred on by Champions League final heartbreak