Home » Soccer » Chelsea 2-2 Burnley: Blues slip up in race for a top-four finish

Chelsea 2-2 Burnley: Blues slip up in race for a top-four finish after first-half goal-fest as Jeff Hendrick and Ashley Barnes strike to take Clarets to 40 points

The tension boiled over for Maurizio Sarri as he twitched and drew on his fake cigarette, fought a running battle with Burnley’s coaching staff and was dismissed from the touchline in the closing seconds of a frantic draw.

Sarri was ordered down the tunnel by referee Kevin Friend and his backroom team became embroiled in a series of arguments with Sean Dyche’s staff at the final whistle.

Antonio Rudiger, injured and unable to play, was also involved as things turned ugly at the end. 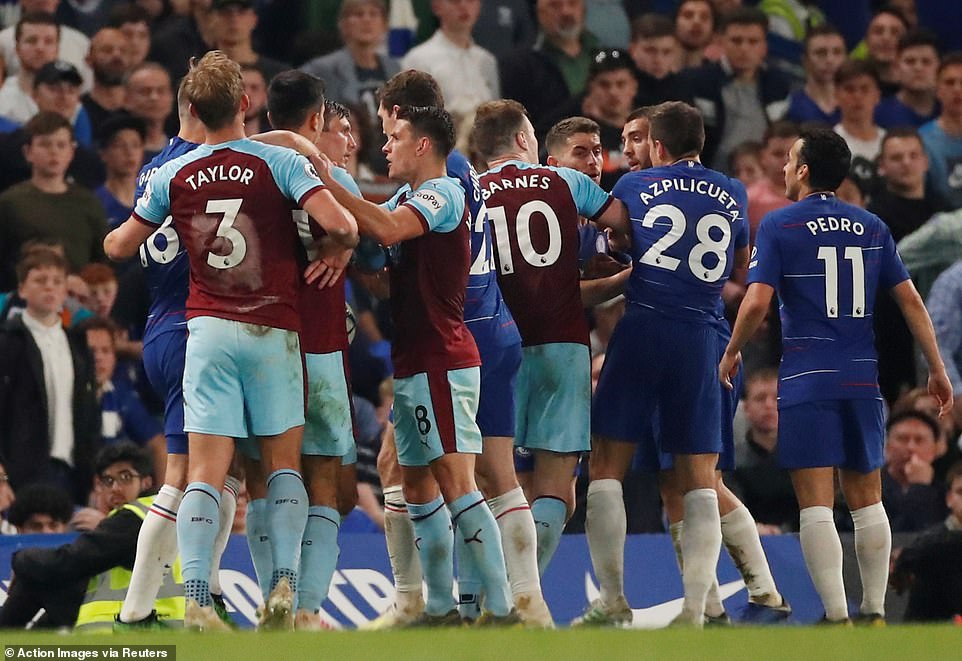 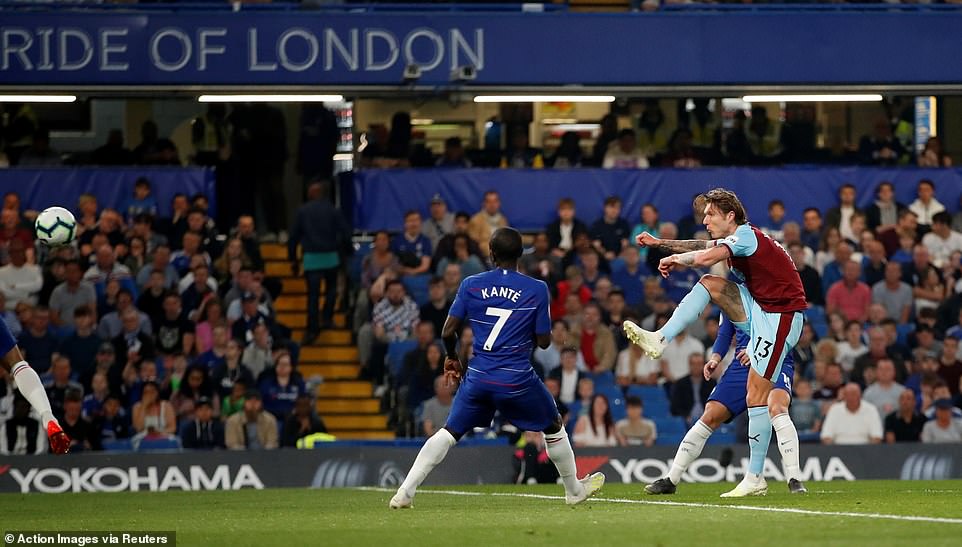 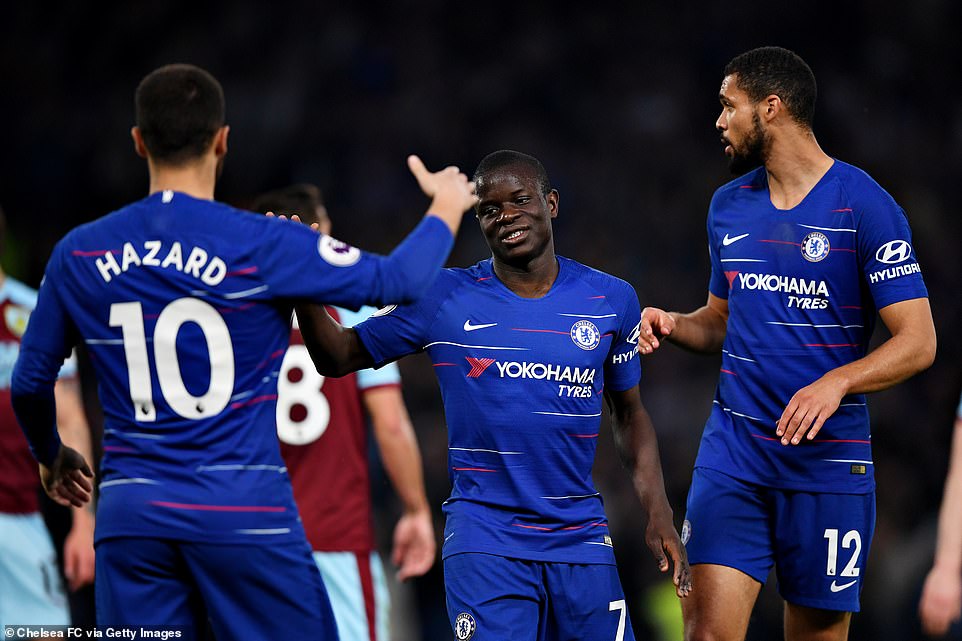 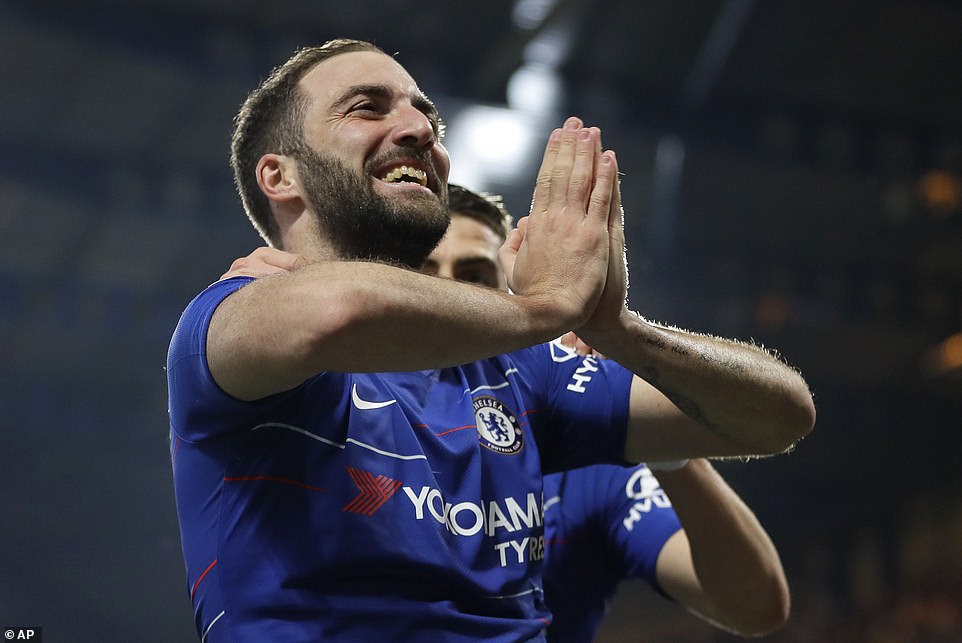 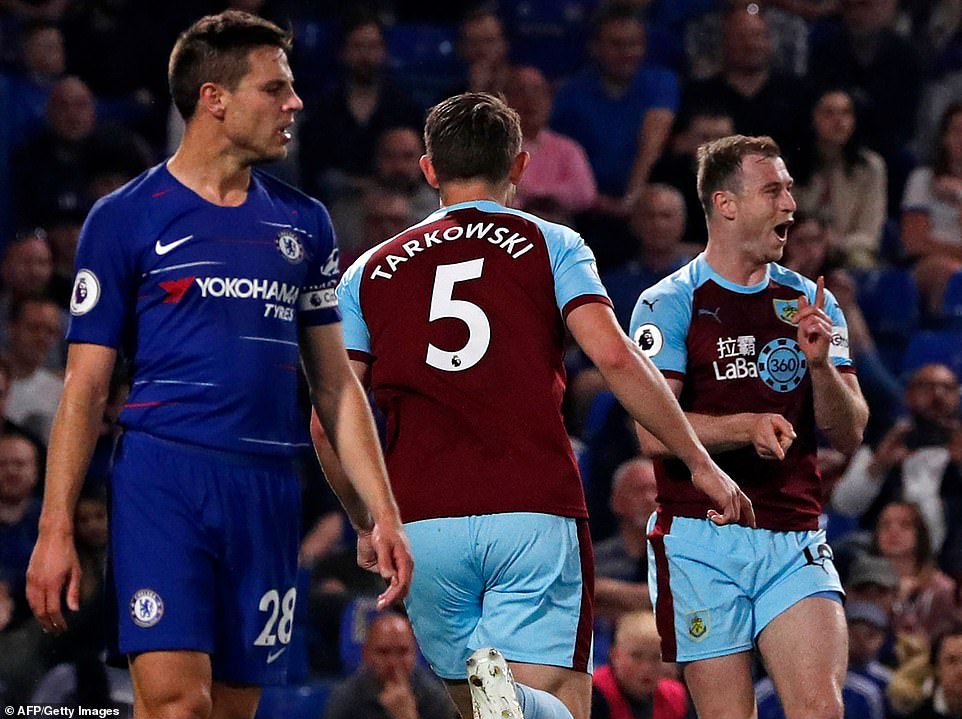 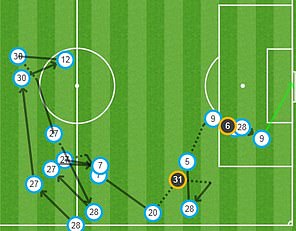 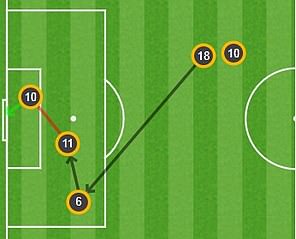 For more stats and maps, check out Sportmail’s Match Zone.

Burnley had dug in and fought hard for the point which will ensue they are playing Premier League football for a third successive season.

They were delighted with the result at Stamford Bridge.

Chelsea were frustrated by another missed opportunity; a chance to put pressure on others allowed to slip by despite dominating the contest.

Yet, with Tottenham, Arsenal and Manchester United all misfiring in the Premier League, they remain firmly in the hunt for the top four and in the semi-finals of the Europa League.

Sarri was ordered to lead them back to the Champions League and two routes remain open.

Although this was a setback deepened by concerns over an injury to Callum Hudson-Odoi who was forced off in the first half.

And the strain was on display as Sarri became embroiled in a running dispute with the Burnley coaching staff and Gonzalo Higuain reacted angrily when hauled off in the closing stages to be replaced by Olivier Giroud.

Higuain had performed well and scored his team’s second during a frantic first half-hour which was triggered by Jeff Hendrick’s brilliant strike which gave Burnley the lead in the eighth minute. 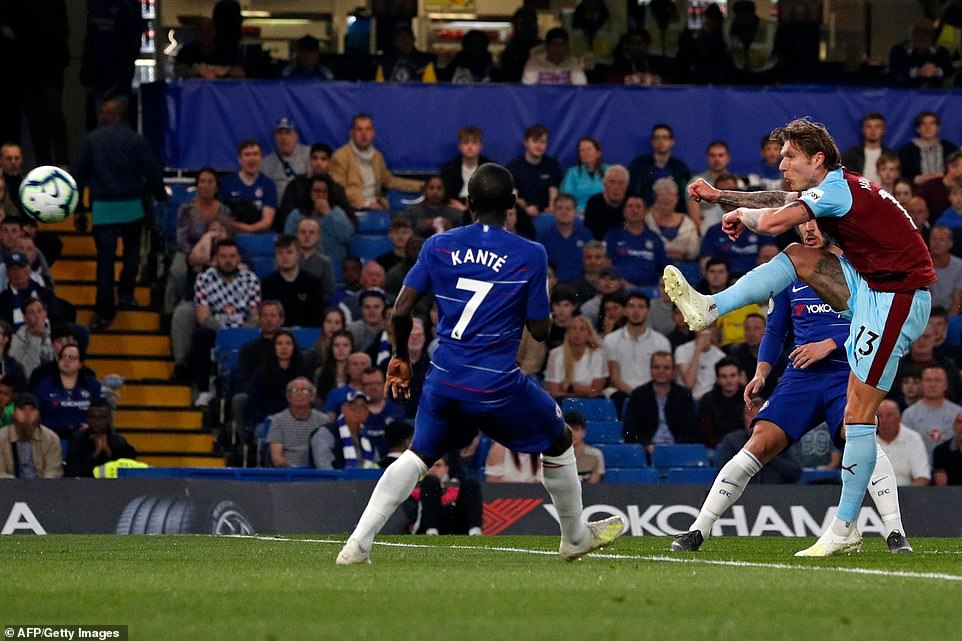 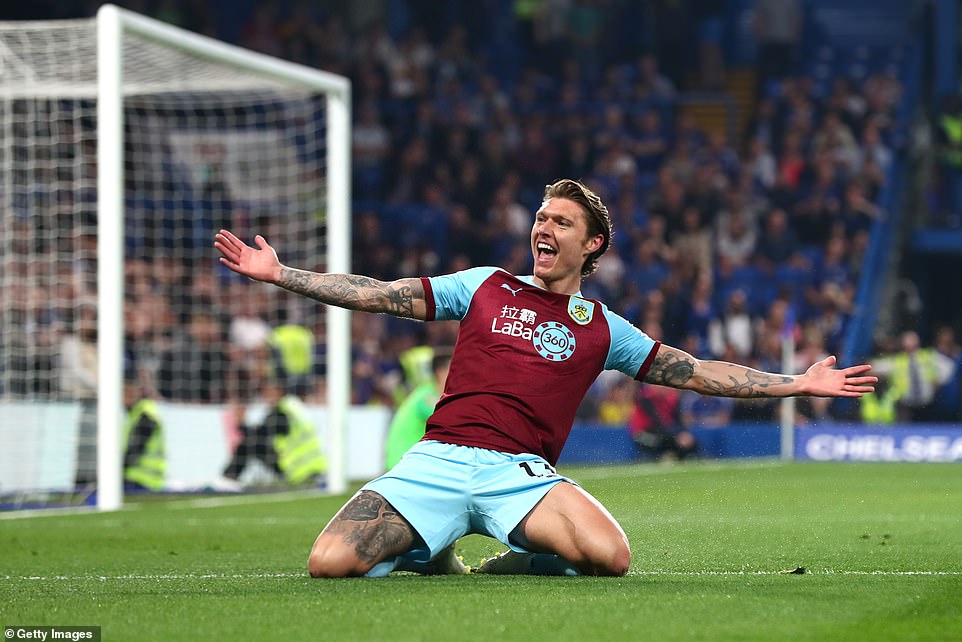 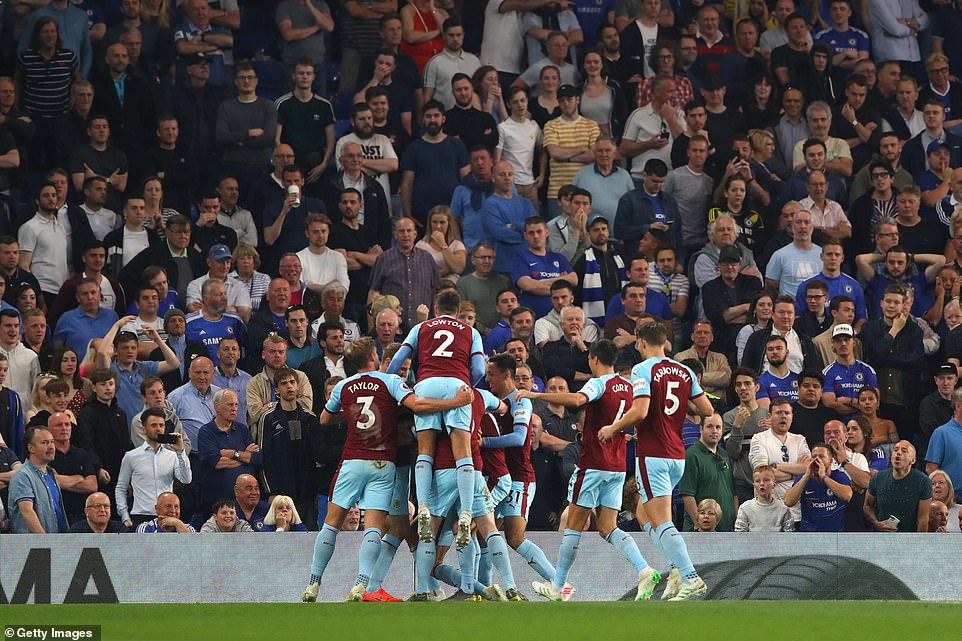 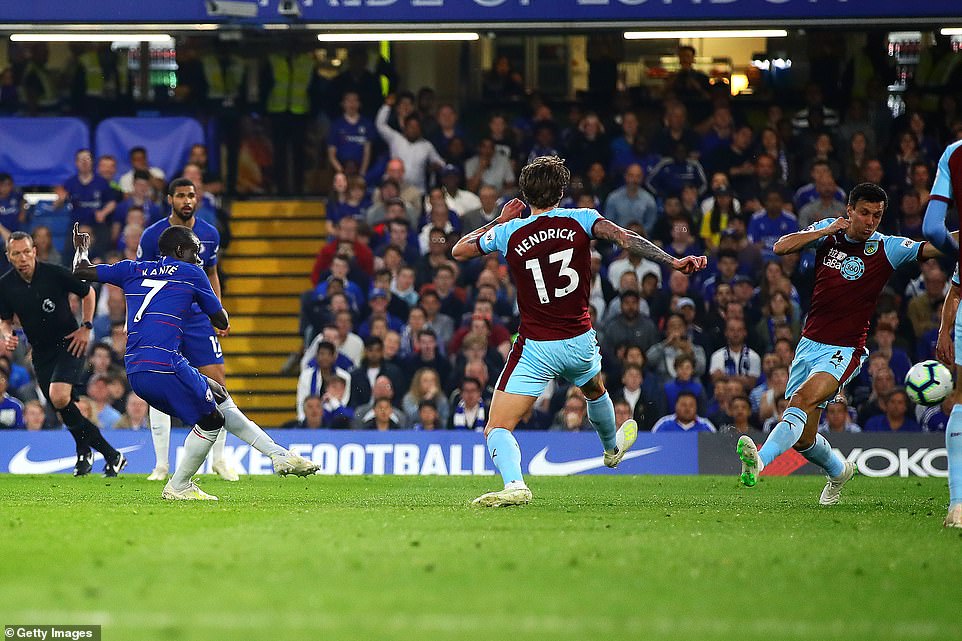 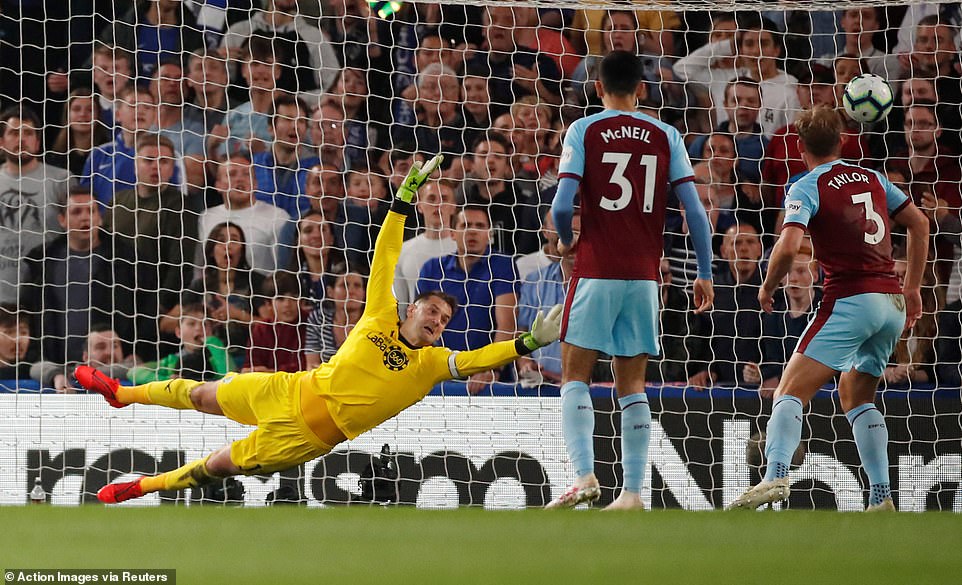 Dwight McNeil’s corner was deep to the back post but Cesar Azpilicueta’s header did not clear the danger.

When it dropped on the edge of the penalty area it was met by Hendrick who unleashed a volley which dipped and faded as it flashed past Kepa Arrizabalaga.

Burnley’s set-pieces and aerial strength would cause further problems for a Chelsea defence still without injured centre-half Antonio Rudiger but Sarri’s team were potent in attack and soon level.

A change of pact through midfield by Ruben Loftus-Cheek and a jinking run by Eden Hazard created the equaliser. Hazard twisted full-back Matt Lowton inside and out before rolling a low cross into the path of Kante, who smashed it past Tom Heaton with his left foot.

Chelsea have not reacted well to going behind this season. Only twice have they turned losing positions into victories but, two minutes later, they were ahead.

It was another terrific strike, this time from Higuain, who accepted a pass from Jorginho, turned neatly inside the penalty area, exchanged passes with Azpilicueta and drove a shot in off the bar.

It was only his fourth Premier League goal since arriving on loan from Juventus in January.

He was supposed to make Sarri’s side click and was criticised when his impact was not instant but this front line with Hazard in sublime form to his left and Callum Hudson-Odoi threatening on the right has a pleasing balance. 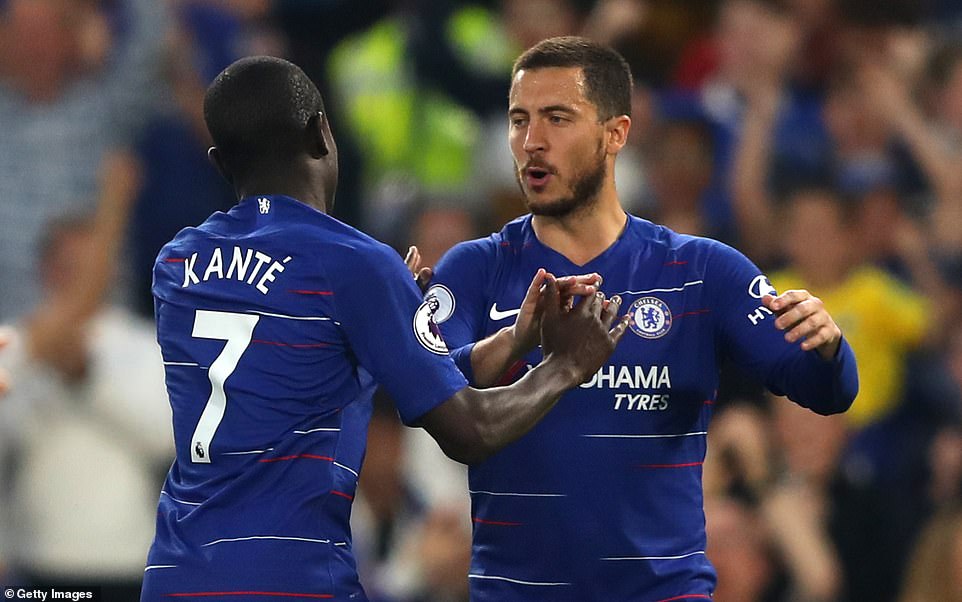 Kante was congratulated by Belgian playmaker Eden Hazard, who claimed the assist for the France international’s equaliser 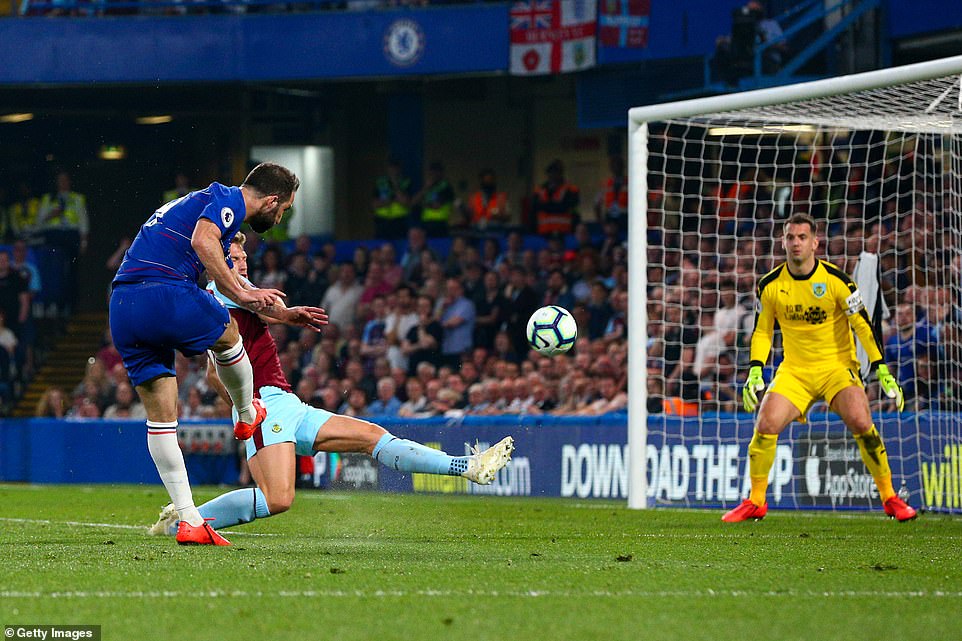 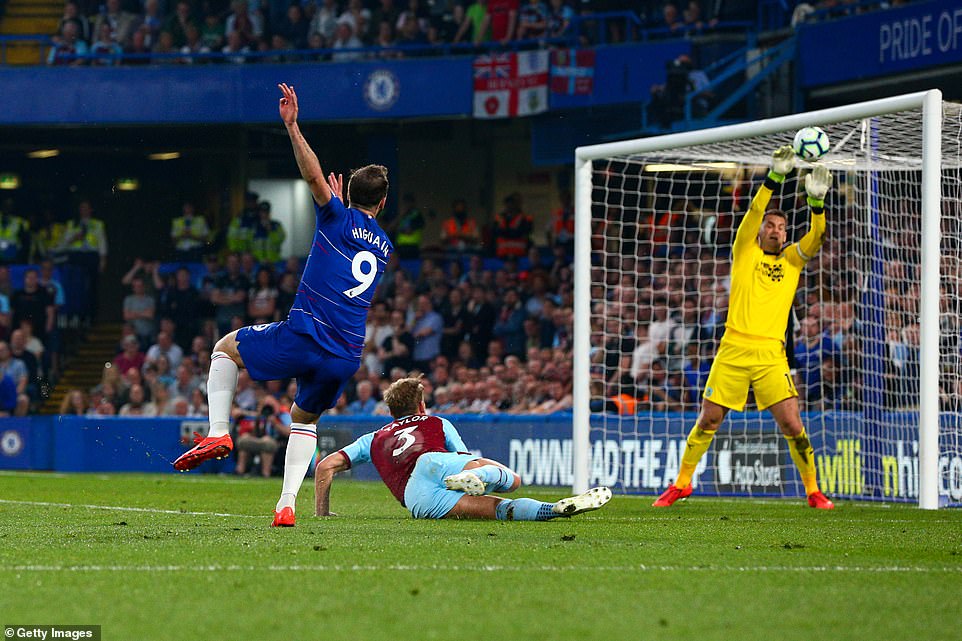 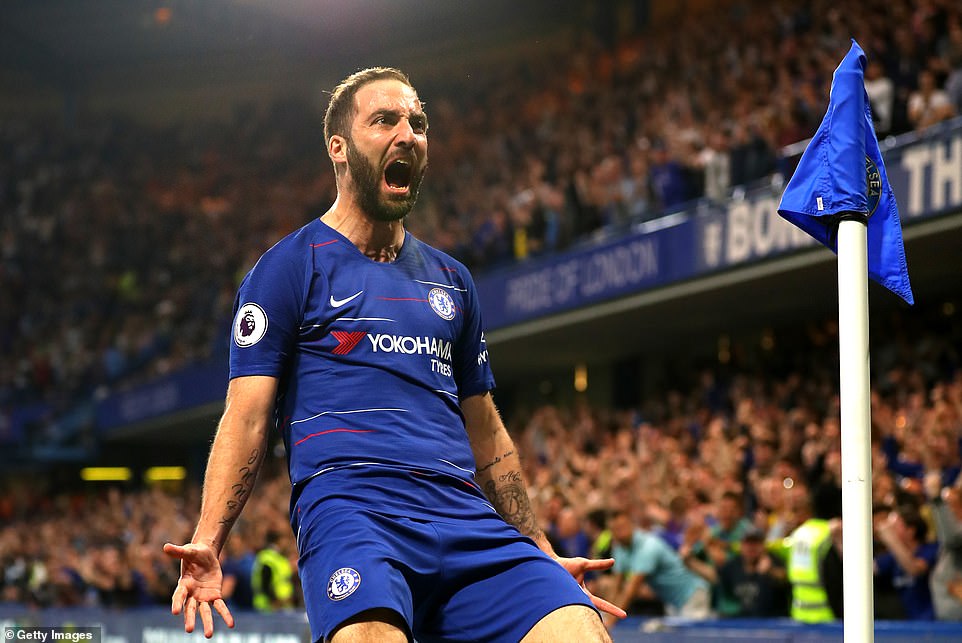 Higuain bustled with promise from the outset. Ben Mee produced an acrobatic clearance to deny him a goal when the game was still goalless.

Hudson-Odoi limped off before the half-time interval to be replaced by Pedro, by which time Burnley were level again, from another set-piece.

This time it was a free-kick, angled deep into the Chelsea penalty box from wide on the right by Ashley Westwood.

Mee won the ball in the air, heading it back across goal where it was glanced on by Chris Wood and finished on the volley from close range by Ashley Barnes, completely unmarked.

It was a seventh goal in 12 Premier League appearances for Barnes, once an unlikely transfer target for Chelsea when Antonio Conte was searching for a robust centre forward.

And he now has one more Premier League goal than John Barnes (28), Harvey Barnes (one) and Giles Barnes (one) combined.

Chelsea rolled forward again. A sweetly struck effort by Jorginho was headed clear by Barnes, Hazard wasted a good opportunity, missing the target when in on an angle and another fierce drive by Higuain was only a foot off target. 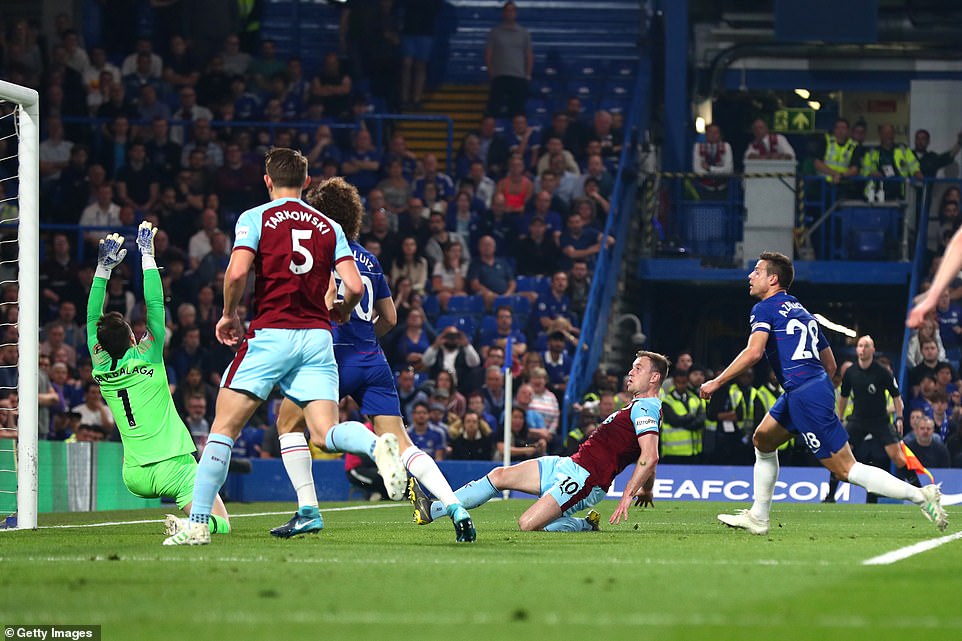 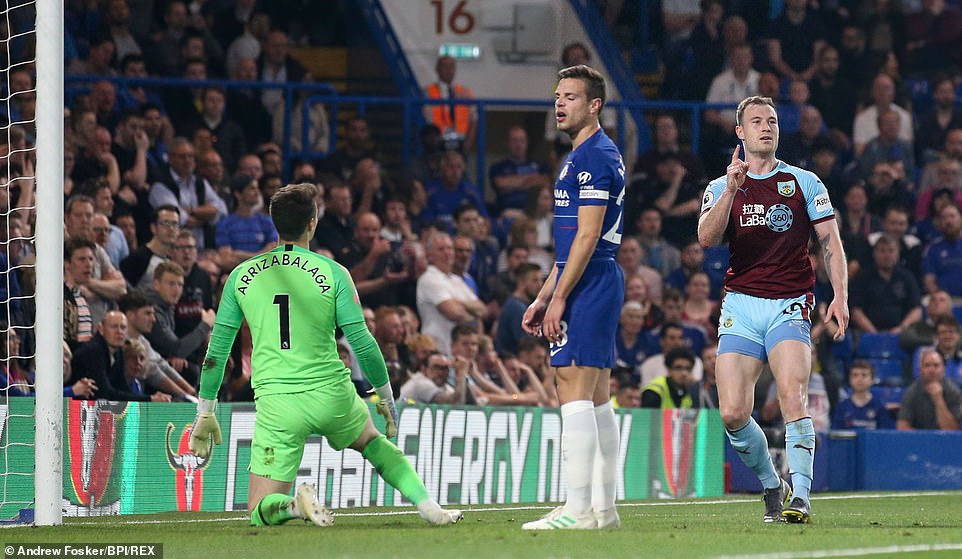 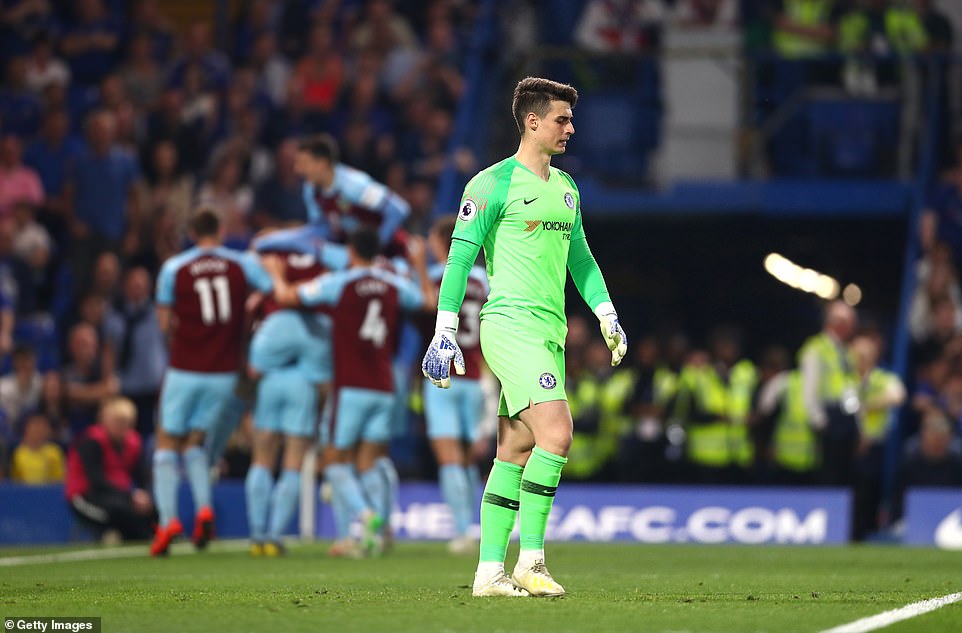 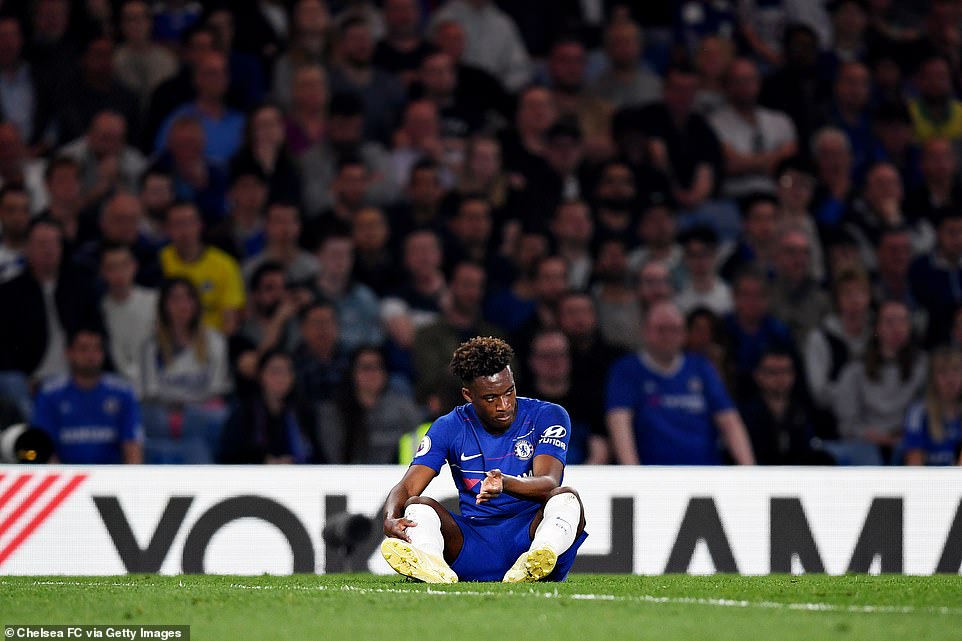 By half time, they had registered 13 attempts at goal and, on the touchline, Sarri became increasingly agitated by what he saw as a deliberate tactic by the visitors to disrupt the rhythm of his team.

With little more than half an hour gone, Burnley keeper Heaton was booked for time-wasting as he took his time over a goal kick and the Chelsea manager was locked in a niggly dispute with Sean Dyche’s assistant Ian Woan.

More words were exchanged and fingers jabbed in the second half when referee Kevin Friend waved play on when Sarri wanted a free kick for a challenge by Charlie Taylor on Pedro.

Fourth official Roger East was getting it in the ear from the Italian.

Mateo Kovacic replaced Kante during the interval although on the pitch the pattern and breathless tempo of the game did not change.

Heaton saved from Higuain at one end while, at the other end, Wood missed the chance to punish Jorginho for a misplaced pass in midfield.

Emerson whistled another shot wide of the Burnley goal and Azpilicueta was denied by Heaton.

Burnley left with the point they came for and celebrated at the end. 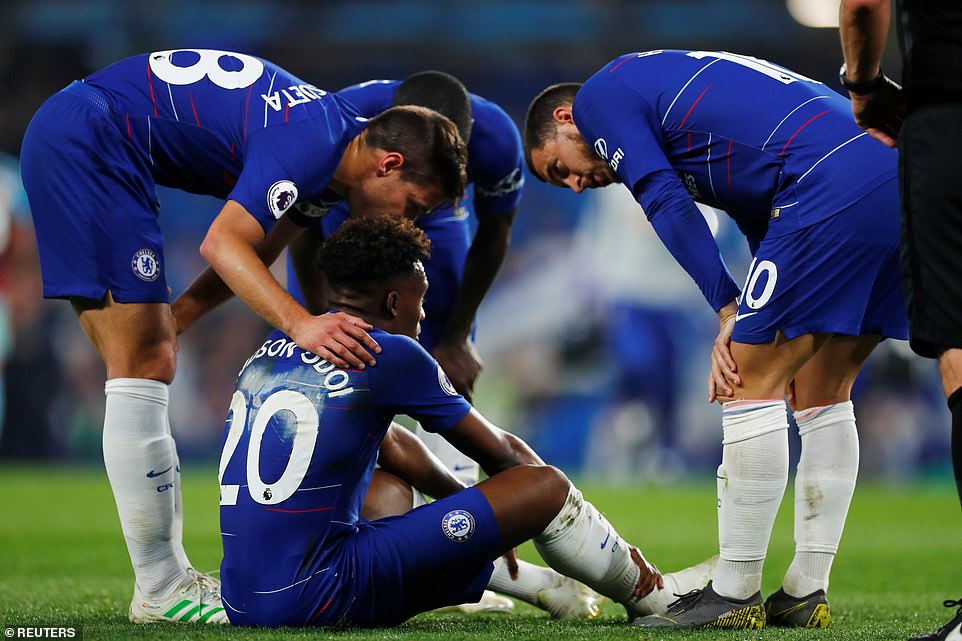 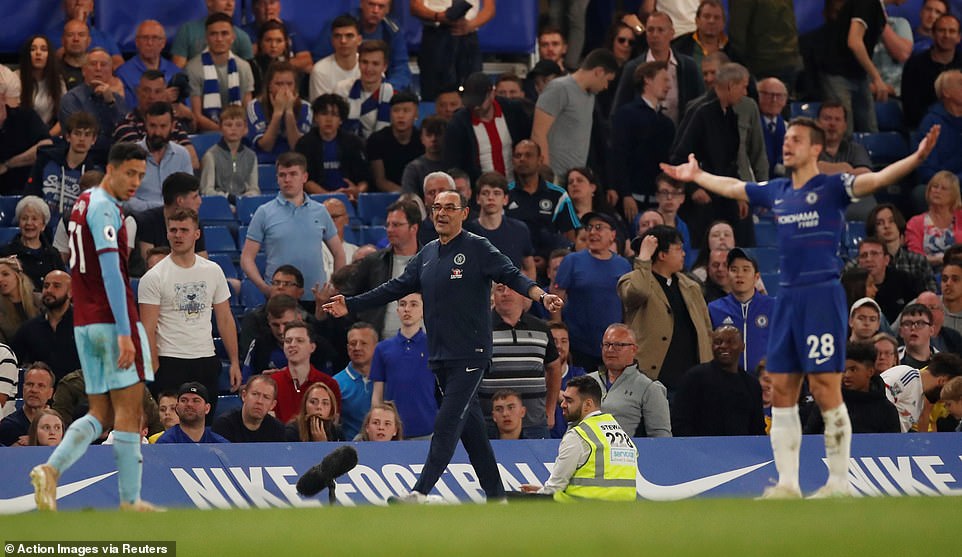 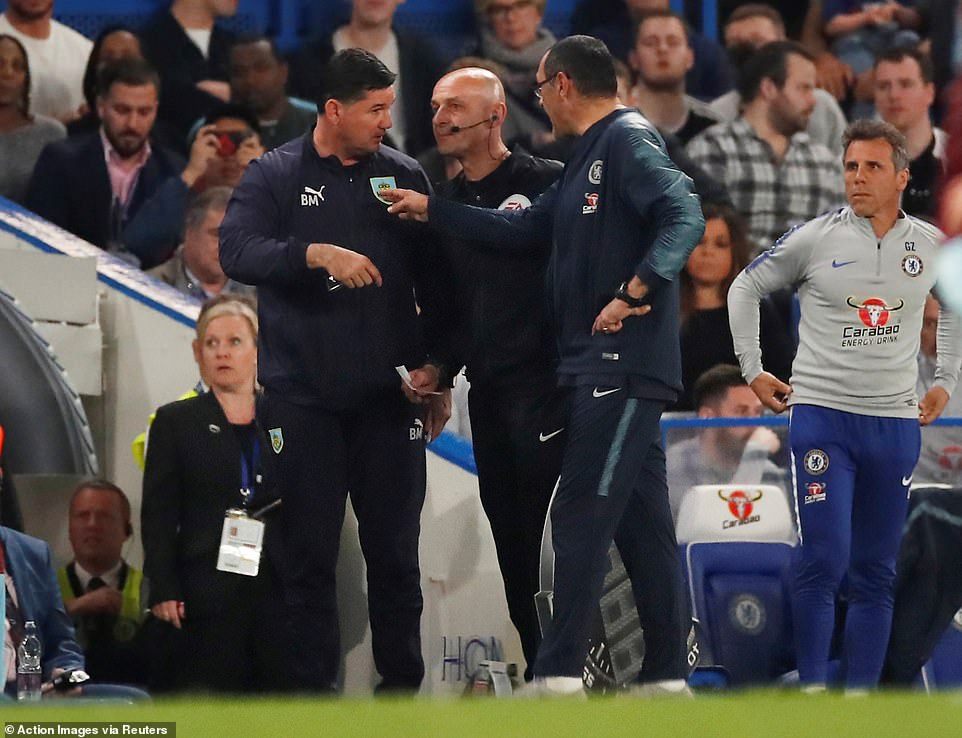 And 60-year-old Italian Sarri was sent off in stoppage time, meaning he had to leave his dugout before the final whistle

Europa League, Chelsea vs Arsenal: Lucas Torreira hoping to validate decision to experience ‘another world’ by inspiring Gunners to victory