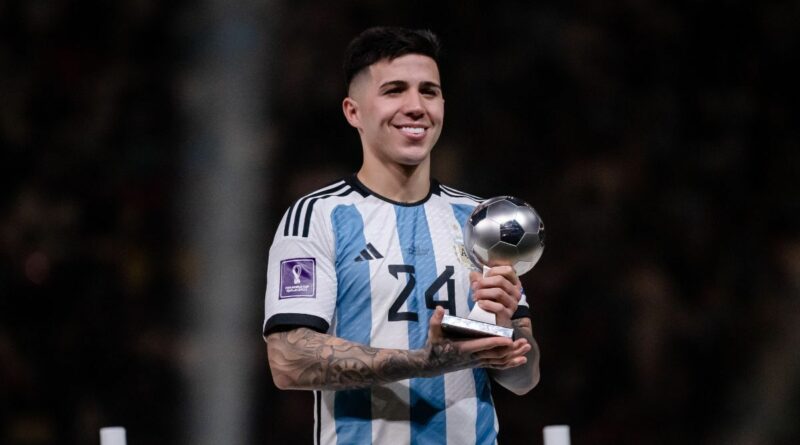 Chelsea have stolen a march on Liverpool and Manchester United in the race to sign Benfica midfielder Enzo Fernandez. The Blues are ‘desperate’ to seal a deal for the highly-rated starlet in January and could smash their transfer record for the second time in 18 months to do so.

Fernandez has been heavily tipped for a Premier League switch since bursting onto the scene as a wonderkid at River Plate in recent years.

Links have only intensified since his impressive start to life at Benfica, playing a starring role in the club’s successful Champions League group-stage campaign.

His stock soared higher at the 2022 World Cup in Qatar, with FIFA naming him the Young Player of the Tournament after Argentina beat France to lift the coveted gold earlier this month.

And, according to The Sun, Chelsea are ready to react to the ever-increasing buzz around his current ability and sky-high potential.

Todd Boehly is willing to back Graham Potter in his first transfer window as Blues head coach by triggering the 21-year-old’s £105million release clause to lure him to Stamford Bridge.

Liverpool and United have also shown a concrete interest but were eyeing a summer swoop, potentially under new ownership at Anfield and Old Trafford, respectively.

And the report claims that Chelsea are now understood to be in the driver’s seat after informing Benfica that they intend to complete a blockbuster deal this winter.

Club figures let it be known to Rui Costa, president of the Portuguese giants, and super-agent Jorge Mendes that Fernandez’s nine-figure release clause posed no problem.

Benfica are unsurprisingly playing hardball to retain his services, given he is under contract until 2027. However, they would be obliged to open the exit door if an interested party sanctions such a move.

Chelsea’s next task is to agree personal terms with Fernandez and his camp over what has the makings of the most expensive transfer in Premier League history.

Roman Abramovich invested £97.5m in signing Romelu Lukaku for Thomas Tuchel in the summer of 2021, the second transfer in the list behind Manchester City’s £100m deal for Jack Grealish.

But all three have since left west London, leaving Boehly and Potter at the wheel of a new era. Midfield will be an area the latter views as a priority to bolster, with Jorginho and N’Golo Kante nearing free exits in July.

Declan Rice and Jude Bellingham are two names refusing to go away but would very much be summer targets.

Chelsea plan to reinforce Potter’s ranks next month, and Fernandez appears to be at the top of his wishlist.

Guardiola admits it’ll be ‘almost impossible’ to win the Quadruple

Premier League to hold conference calls with captains, all 20 managers and medical experts