Chelsea fans believe they have unearthed the next Jack Grealish after pictures of Leo Castledine emerged from pre-season training.

The 17-year-old is just one of many youngsters to get the chance to shine in front of Thomas Tuchel ahead of the new campaign. The Blues have had a number of top talents come through the academy in the last few years and Castledine could be the next.

While the likes of Mason Mount and Reece James can count themselves as key players at Stamford Bridge, the next generation are already eyeing their chances ahead of the next Premier League season.

There have been fleeting performances from the likes of Lewis Hall and Harvey Vale, the latter of whom helped the England Under-19 win the Euros this summer.

And the next big thing could be Castledine, who signed from AFC Wimbledon as a 15-year-old. Naturally an attacking midfielder who can operate on the wing, the teenager has been wowed coaches with his technique and skill.

It is no surprise to see comparisons with Manchester City and England star Grealish – but it goes further than just playing style and position. Fans got to see the youngster in action in training for the Blues and many were confused over why the former Aston Villa ace was in Chelsea colours.

Popular Chelsea account @ChelseaYouth tweeted a picture of Castledine with the caption: "Doppelgänger." And this fan said: "Wish Grealish."

Another fan wrote: "Leo castledine right looks like grealish." Which led to a reply: "Ya but he doesn’t have a face you’d love to slap!!"

There might be more opportunities for the Chelsea youngsters to shine in front of Tuchel amid a slow transfer window. New owner Todd Boehly has promised arrivals but has had his work cut out after the departures of Bruce Buck, Marina Granovskaia and Petr Cech.

Several players have been heavily linked including Raheem Sterling, Matthijs de Ligt, Raphinha and Jules Kounde. However, Chelsea remain the only club in the top six not to have made a single signing yet this summer. 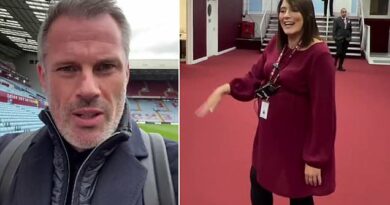 Carragher is left red faced after being blocked from seeing Gerrard