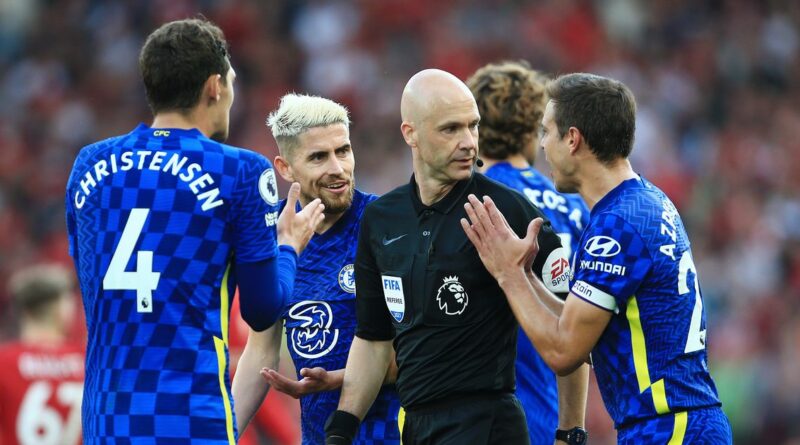 Chelsea have been slapped with an FA charge for two breaches of the same rule following the unsavoury scenes that unfolded after Reece James was sent off against Liverpool.

The right-back saw red after referee Anthony Taylor adjudged him to have handled the ball on the goal-line after reviewing the incident on the touchline VAR monitor.

Thomas Tuchel’s men had been leading the game 1-0 when the penalty was awarded, thanks to a sensational header from Kai Havertz.

The Blues were incensed by Taylor’s decision to award a penalty, which Liverpool star Mohamed Salah subsequently converted, and send off James.

Captain Cesar Azpilicueta and a number of his team-mates confronted Taylor, before Salah converted the spot-kick.

The Blues then clashed with Liverpool players including Jordan Henderson as Salah celebrated, with Antonio Rudiger and Edouard Mendy booked for their part in the confrontation.

Chelsea continued to question Taylor for his decision when the half-time whistle went, with Mason Mount among those to confront him in the tunnel at Anfield.

The Blues were miraculously able to hold on to claim a point against the Reds, to confirm their title credentials.

Did Chelsea cross the line in their protests against Reece James' red card? Let us know in the comments section…

But the FA have reacted furiously to the scenes that played out on Merseyside and have hit Chelsea with a charge for two breaches of rule E20.1.

“Chelsea FC has been charged with two breaches of FA Rule E20.1 following their Premier League fixture against Liverpool FC on Saturday,” the governing body said in a statement.

“It is alleged that Chelsea FC failed to ensure its players conducted themselves in an orderly fashion during the 48th minute of the first half and following the half-time whistle.

“Chelsea FC has until Friday to provide a response to this charge.”

It is expected that the Blues will be hit with a heavy fine if found guilty of the charge, though after the game Azpilicueta had insisted his side had done nothing wrong.

“The referee gets the information and goes to the VAR and just sees one image and it's enough for him to give a penalty and the red card,” he said.

“But then we got two yellow cards for our defensive guys. We were just talking and I think it's good we can talk to the referees and they can explain the situation.”

Spending, saving and Sancho: Welcome to a new transfer window where the old rules don’t apply