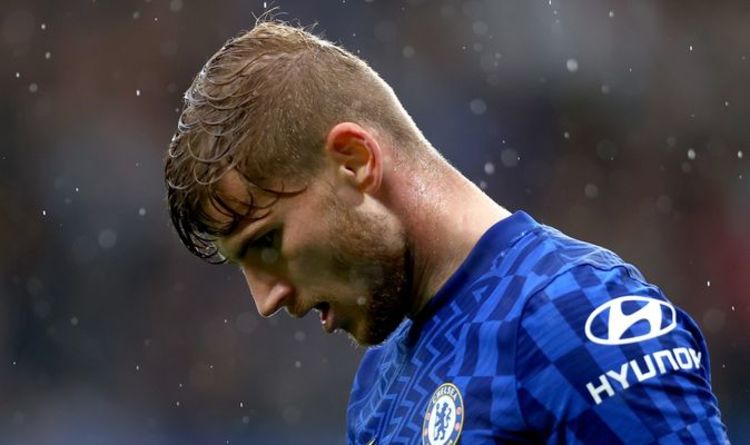 Chelsea striker Timo Werner has been warned that he still has work to do to salvage his Blues career – despite netting in the 3-1 win over Southampton last weekend. The German striker has struggled to live up to lofty expectations since his £53million move from RB Leipzig back in 2020.

Werner’s slow start to life in the Premier League prompted Chelsea to sanction a club-record £97.5m deal to lure Romelu Lukaku back to Stamford Bridge.

The pair have played together in recent games under Blues boss Thomas Tuchel, despite the expectation that Lukaku was signed as an alternative to the 25-year-old rather than a striking partner.

But Werner has been warned that he still has to find more if he is to avoid following in the footsteps of Chelsea’s previous big-money striking flops.

Ex-Blues striker Tony Cascarino admitted that Werner, who managed just six league goals in his first year in the Premier League, cannot afford to keep missing so many big chances.

“Thomas Tuchel’s comment that there were “a lot of things to improve” for Timo Werner after his goal against Southampton was telling,” Cascarino said in his column for The Times.

“Chelsea fans have been loyal to misfiring centre forwards, such as Andriy Shevchenko and Fernando Torres, in the past and the same has been true of Werner, but strikers cannot be simply OK at big clubs. The German cannot continue to miss so many big chances, because otherwise — just as with Shevchenko and Torres — the club will move him on.”

Werner’s woes in front of goal have a striking similarity to the misfortune of Shevchenko and Torres, who both endured a torrid time at Stamford Bridge.

Despite arriving in London with fearsome reputations, the pair struggled to replicate their previous goalscoring exploits with the Blues – and ended up departing as failures.

Werner has shown glimpses of his capabilities after accumulating an enviable scoring record in the Bundesliga with Leipzig.

The German has two goals in his last three appearances after managing just 12 goals in 52 appearances across all competitions last year.

Werner has also had a staggering 16 goals chalked off by VAR in his short time so far at the Blues – perhaps highlighting that he’s been more unfortunate than anything else.

He had one goal ruled out by VAR before hitting the net against the Saints, with Tuchel admitting that he was relieved for the striker.

“Yes we are all relieved, him and me and the whole club,” said Tuchel.

“Every time he scores we have the feeling there is a VAR decision to take it away from him, there have been a lot of very narrow decisions.

“I remember one against Liverpool that was super close. He has to keep on going and a lot of things to improve. We’re happy and relieved that he scored.

“It was very, very important goal for us to secure the win. And on the other hand he was there when he needed to be.”