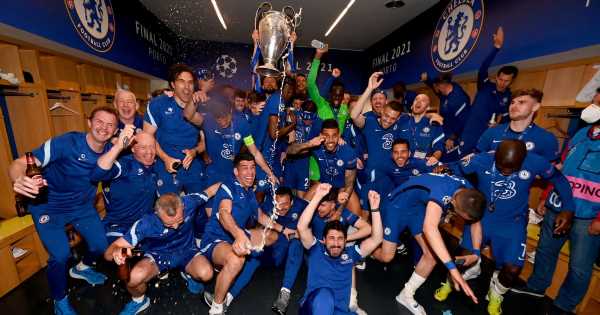 Chelsea were crowned kings of Europe after beating Manchester City thanks to a heroic defensive display after Kai Havertz scored the only goal of the game.

The £72million rounded City keeper after a perfect through-ball from Mason Mount just before the break.

And Pep Guardiola's side couldn't find a way past Chelsea's stubborn defence despite throwing on Sergio Aguero and Gabriel Jesus.

Tuchel and his players celebrated on the pitch after the victory – and the partying continued into the night in the dressing room at the Estadio do Dragao.

The manager was seen entering the dressing room while vigorously shaking a champagne bottle, spraying his entire squad with bubbly and getting soaked himself.

In a video posted on Chelsea's Instagram account, Tuchel could then be seen jumping out with his players before taking off his champagne-soaked shoes and continuing to dance about in his socks.

Kurt Zouma busted out some dance moves with Willy Caballero and Jorginho in another video, while Tammy Abraham went full John Terry as he celebrated in his kit despite not even making the squad for the game.

Jorginho, who could also be seen swigging from a bottle of bubbly, posted a three-minute video of himself his team-mates singing 'Championes', with the midfielder saying: "I think they're happy. Just a little bit."

And Ben Chilwell was pictured sitting on the dressing room floor with the European Cup, wearing a Chelsea scarf round his head as he kissed the trophy.

Around half of the 12,000 fans in the Estadio do Dragao stayed in the stadium to celebrate afterwards, while Chelsea's billionaire owner Roman Abramovich could be seen embracing players after flying out to Portugal to watch the game.

He met Tuchel in person for the first time at the game, and afterwards the triumphant manager said it was "the best moment for our first meeting".

Tuchel joked: "It was the best moment for our first meeting, or the worst because from now on things can only get worse!"

The German boss then vowed to beat City again next season – in the race to be crowned Premier League champions.

"I want the next title and I feel absolutely happy," said Tuchel. "I feel part of a really ambitious club and strong group that suits my belief and passion about football.

'We have work to do to close the gap and this is what I am all about."

Goal hero Havertz was in high spirits after the game, and swore on TV when asked if he had repaid a chunk of his transfer fee.

Interviewer Des Kelly apologised to viewers for the language – which a jubilant Havertz later repeated on his Instagram account, posting "We won the f***ing CHAMPIONS LEAGUE!!" with a trophy emoji.