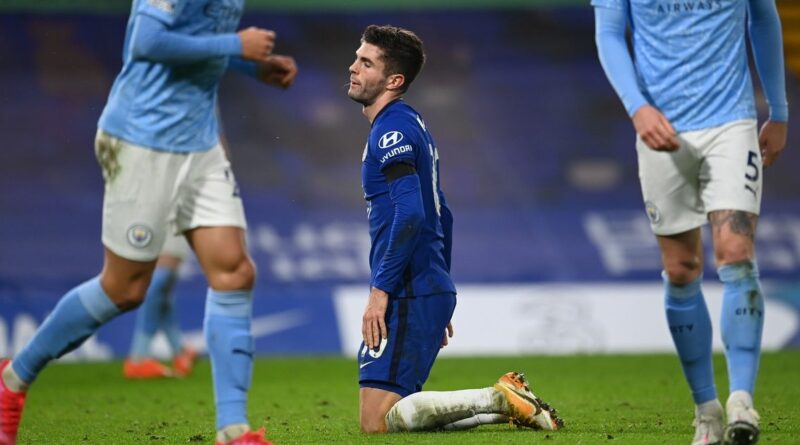 Christian Pulisic has warned Chelsea must show character to get through their “tough period”.

Manager Frank Lampard is under mounting pressure at Stamford Bridge after a dismal run which has seen his Blues side lose four of their last six games and slip behind in the title race.

It has put the spotlight on Lampard and left him facing questions about his future, especially after they were blitzed by Manchester City in Sunday’s first half.

But Pulisic is convinced that they can turn it around and get their season back on track as they face Fulham, Leicester and Wolves after this weekend’s FA Cup third round tie with Morecambe.

Pulisic said: “We’re in a tough period. It’s going to happen to everyone at times and we have been in these situations ourselves before.

“We have a game next week where we need to start turning it around. We need to get results quickly. We will watch the Manchester City game back, look at it as a team and see what we can improve on.

“It’s not going to be easy but we need to show character now.”

Lampard is not in any immediate danger but is under no illusions that, after spending £200million last summer, Chelsea must show an ­improvement this season.

The club legend is likely to be given the season to turn things around, but owner Roman Abramovich clearly wants Champions League football.

There are some big-name coaches on the market, like Thomas Tuchel after his ­departure from Paris Saint-Germain, and former Juventus boss Max Allegri admits he fancies a move to English football.

Southampton boss Ralph Hasenhuttl’s progress at St Mary’s will not have gone unnoticed among the Blues hierarchy either. But ­Lampard did well to get into the top four last season and is not even halfway into his second term, so no judgements have been taken.

But the worry must be that he must get more from the likes of Timo Werner and Kai Havertz, as the ­German stars have shown just flashes of their potential, while injuries have held back Hakim Ziyech.

Pulisic was encouraged that at least the team dug deep in the second half against City.

He said: “We ­conceded goals with a lot of counter situations and we were not prepared to stop that, so the first half ­really let us down.

“We had to go back out and show character. We are never going to give up. We know we have talented guys and a good team but we need to show it, which is what we did in the second half.

“It’s not easy to come back from three goals down but it’s happened before so we gave it everything and managed to get one back.

“But it was just too little, too late.”

UEFA warns it will not amend Champions League qualification process