Melbourne City's runaway W-League premiership winners will not be taking their foot off the pedal when they play in front of their supporters for the first time since wrapping up the title.

On Sunday afternoon Rado Vidosic's side will face Brisbane Roar in their final home game of the season before the finals, knowing that they hold the fate of the other finalists in their hands. 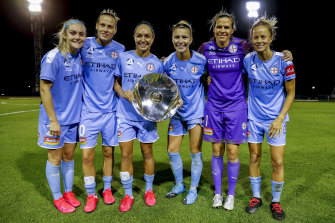 Melbourne City will be able to present the premiers plate to home fans on Sunday.Credit:Getty Images

If they beat Brisbane then the Queenslanders will definitely miss the finals and the Western Sydney Wanderers will make the top four irrespective of their result in Perth.

Even a draw will not be enough for the Roar, who face the daunting prospect of having to beat the hitherto undefeated City to have any chance of making the finals.

Few would want to risk anything on them doing so. In fact the odds against them even scoring are long given that City have kept a clean sheet in their last seven games and will set another W-League record if they do so again.

A victory would also mean they have won 11 consecutive games: their only blip being the opening-round draw against Newcastle Jets, one of the more baffling scorelines of the season given the Jets are marooned at the foot of the table with just two wins from their 12 games.

There will be a plate presentation for City fans and players to celebrate the club's second premiership, City's women having won every game they played in the 2015-16 season, the club's first in the W-League.