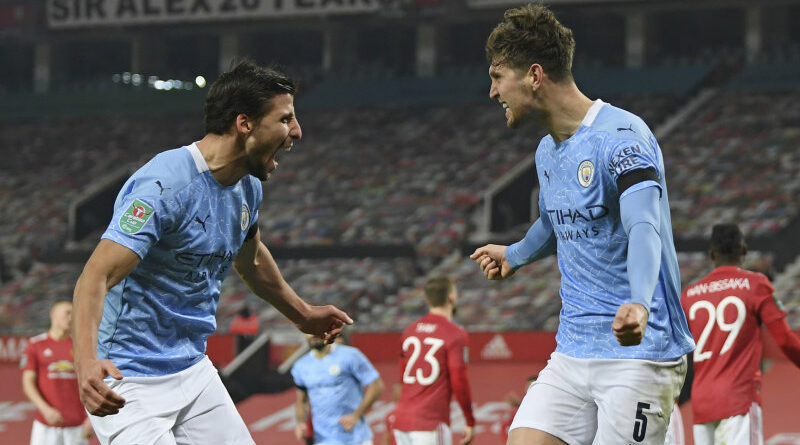 City beat fierce rivals United 2-0 at Old Trafford on Wednesday thanks to second-half goals by John Stones and Fernandinho, setting up a meeting with Tottenham in the League Cup final at Wembley Stadium on April 25. 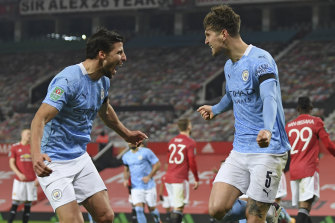 City have no such issues. They have a chance for a fourth straight title — and a sixth in eight seasons — in a competition which the team have virtually made their own.

"We achieved something incredible," Guardiola said. "I know the (League) Cup is not the Champions League, but four times in a row reaching the final is impressive."

An open, end-to-end match, which started with three goals disallowed for offside in the opening 24 minutes, was settled by goals from set-pieces.

Stones bundled the ball into the net off his waist from an in-swinging free kick by Phil Foden in the 50th minute to put City ahead inside an empty stadium.

Fernandinho, the 35-year-old Brazilian starting ahead of Rodri in central midfield, secured the win with a volley from the edge of the area that crept inside the post following a weak headed clearance by United right back Aaron Wan-Bissaka.

"City can score many great goals, and you can accept that," said United manager Ole Gunnar Solskjaer, "but when you concede from two set plays, simple ones that we should have cleared, you're very disappointed."

City repeated their win over United in last season’s semi-finals, which were played over two legs in contrast to this year’s one-match shootout.

That was one of three semi-final defeats for Solskjaer’s team in 2020, along with the FA Cup and Europa League. 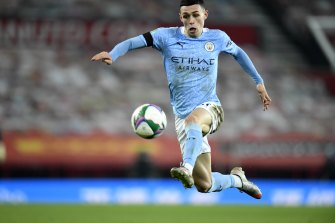 "We're getting closer," Solskjaer said. "This is a much better version of Man United compared to a year ago in those semis. That's positive, but it's not enough."

City, though, were the superior team — Solskjaer said as much — and had the better of the chances in open play, with Kevin De Bruyne hitting the post with a fierce shot from the edge of the area in the first half and Riyad Mahrez bringing a fine, tipped save over the crossbar out of United goalkeeper Dean Henderson after the break.

Stones' goal continues the impressive rebound of a City career which looked over just six months ago. Settled once again in his personal life, he has regained his place at centre-back and put in an assured performance alongside the excellent Ruben Dias to repel what has been one of the Premier League's most potent attacks in recent weeks.

US goalkeeper Zack Steffen, who again started for City with Ederson out after contracting the coronavirus, tipped over a curling shot by Bruno Fernandes in the ninth minute. But late pressure from United didn't yield any clear-cut openings as City comfortably saw the game out.

After starting the season slowly, City are hitting top form, with this win over United coming three days after a 3-1 victory at Chelsea in the Premier League and a 4-1 triumph at Arsenal in the cup just before Christmas.

Guardiola has made his team harder to beat in recent months by playing two defensive-minded central midfielders to give extra protection against counterattacks, and it is paying off. City have conceded just three goals in their last 12 games in all competitions.

"It's about the consistency," Guardiola said. "We didn't have a proper pre-season and that's why we need a little bit of time but I think we are already there."

City’s players wore retro No. 8 jerseys ahead of the game in honour of Colin Bell, the club’s midfield great who died on Tuesday aged 74. There was a minute’s silence and both teams wore black armbands in a tribute to the former England international.

"I think how we played today was a reflection of him," Stones said, referring to Bell. "A great moment for us and hopefully he is looking down on us."